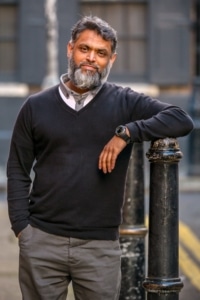 A British-born Muslim, Moazzam Begg is a former Guantanamo Bay prisoner and outreach director for CAGE. After his release, he became one of the most prominent public-speakers and Muslim advocates for justice and dialogue.

He is the author of the best-seller Enemy Combatant in which he recounts his experience as an innocent man detained and torture at Guantanamo, Bagram and Kandahar. The Muslim 500 listed him as one of the 500 “most influential Muslims” in the world. The New Statesman listed him in the top 50 “Heroes of our time”

He has travelled extensively to investigate state abuses and western complicity in torture including to Egypt, Tunisia, Libya, and Syria. A direct eye-witness to the conflicts in Bosnia, Afghanistan and Syria, his life has been recorded by the Columbia University Oral History project, and the BBC Storyville documentary, The Confession.