Were The Taliban The Voice Of Reason After 9/11?

These words were pronounced by Mullah Abdulsalam Zaeef; not in a hotel in Doha in 2020, but in a press conference just days after the 9/11 attacks in 2001, 19 years ago.

Sitting in front of a crowd of journalists, the unassuming man, bespectacled and wearing a black turban, responded to their questions. In a mild voice. He gave simple answers, which did not seem to satisfy the audience at the time.

Twenty years later, his patient replies are wise pieces of advice in foreign policy, which – had they been followed – would have avoided much of the absurdity we witness today.

Ultimately, his were words of common sense, which were in line with the fitrah (human natural predisposition), and rooted in the prophetic tradition. 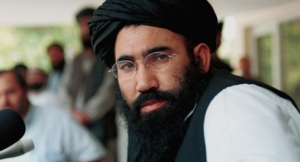 “The starting of war is not easy. It has very bad results and a very bad future.”

This statement is of course true for those at the receiving end of the conflict. Between 1.2 million and 4 million civilians, at least, have been killed  by US-led post-911 wars. Thirty-seven million people have been made refugees.

For the US, the material price to pay for war has primarily been financial, costing a staggering $6.4 trillion to the American taxpayer. The deeper cost has been a moral one.

Even for the most cynical, this cannot be seen as “a price worth paying”, to quote Madeleine Albright on the death of Iraqi children.

This is especially true considering the US seems to have been unable to win any of these wars.

Prophetic Lesson: War is the last resort. Peaceful means of resolution should always be preferred and pursued.

The Messenger of Allah (ﷺ) said, “Do not wish for an encounter with the enemy. Pray to Allah to grant you safety; (but) when you encounter them, show patience.” [Al-Bukhari and Muslim]

“We were the first country to condemn terrorism and terrorist activities,. But we need evidence and proof. This is the good way to solve problems.”

On 21 September 2001, G. Bush issued an ultimatum to the Islamic Emirate of Afghanistan: surrender Usama bin Laden or face the might of the US military. He added that his demands were not open to negotiation or discussion.

“We want justice; we don’t want surrender without any evidence”, responded Abdulsalam Zaeef at the time, even offering to put Usama bin laden on trial in front of an Islamic court in Afghanistan, should evidence be presented to warrant it.

Instead, the US chose to engage in a programme of international kidnap and torture.

Nearly 20 years later, the US has still not been able to put on trial the five men it charged for organising the 9/11 attacks, mainly due to the fact that the CIA waterboarded, sleep deprived and sexually assaulted the men for several years before their transfer to Guantanaamo, foregoing any possibility of a fair trial.

The Messenger of Allah (ﷺ) said,“Were people to be given everything that they claimed, men would [unjustly] claim the wealth and lives of [other] people. But, the onus of proof is upon the claimant, and the taking of an oath is upon him who denies.” [40 hadiths by Imam al Nawawi]

“We call all countries to come to negotiations; to come to peace. We are part of this world.”

For any other country, this would have been seen as a perfectly reasonable call. Demonised at the time, this wasn’t the case for the Taliban. Instead, they were hunted down, kidnapped, tortured and thrown in CIA secret prisons or Guantanamo.

Mullah Abdul salam Zaeef himself spent several years in Guantanamo, despite his status as an ambassador.

Now, after suffering moral shame and trillions of dollars lost through 20 years of fighting, the US and its allies this year finally came to the negotiating table with the Taliban.

This led to some surreal moments.

Previous to his appointment with the US president, Mullah Baradar had been detained in Pakistan without charge  for eight years, after being kidnapped by a joint team of ISI and CIA officers in 2010.

Released just two years ago, Mullah Baradar and his delegation were invited by Pakistan’s Foreign Minister Shah Mehmood Qureshi last month to discuss the peace process. This time, there were no chains digging into his wrists, and  Lieutenant-General Faiz Hameed, the very head of ISI, walked behind Mullah Baradar. 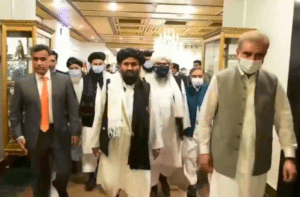 Prophetic lesson: Do not abuse your enemy, you might have to shake hands with him later.

For the past 17 years, CAGE has been campaigning for due process and dialogue. Detractors, largely among the Islamophobia industry, have been deeply bothered to see Muslims taking an unapologetic stance when it comes to calling for accountability as a means of ending the “war on terror”. Supporters, on the other hand, have seen this work as vital and trailblazing.

Having started as a campaign group focusing on the release of Guantanamo detainees, and advocating for dialogue, today we witness former several ex-Guantanamo detainees leading the negotiations and peace process. This is a vindication for us, and affirmation that standing for Islamic principles will always place you on the right side of history.