Sara Khan’s article for Hope not Hate published in their 2017 State of Hate report, is a government-sponsored smear directed at dissenting Muslim individuals and organisations. The tactic to smear by association cheaply disguises the reality of how CAGE operates.  CAGE has always defended principles, regardless of people, in accordance with the rule of law.

The publication reveals that Hope not Hate is being used as a vehicle of state propaganda. Ms Khan’s stance is not surprising considering the nepotism that surrounds her privileged relationship with the government. Her sister, Sabin Khan, is the deputy director of the Research Information and Communications Unit (RICU), the government’s secretive domestic propaganda unit connected to the Office for Security and Counter-Terrorism (OSCT) within the Home Office. An OSCT document leaked last year revealed that Sara Khan’s MakingAStand project was a product of theirs and that her organisation ‘Inspire’ was in receipt of PREVENT funds.

Sara Khan herself is an advocate for PREVENT, a strategy which has little to no academic basis and has been criticised for its curtailment of liberties, chilling effect on dissent and demonisation of the Muslim community by scores of academics.

This is made abundantly clear in the section on Muslim activist and online platforms, which is a textbook regurgitation of the PREVENT Strategy’s explication of “extremism”. PREVENT perpetuates structural Islamophobia and controls discourse that is perfectly legal and little to do with hate, yet smears it as “Islamist” and “extremist” as it conflicts with the PREVENT definition of “British values”, otherising whole communities in the process.

The founder of Hope not Hate Nick Lowles is a member of the government’s “Anti-Muslim Hatred Working Group”, which has been touted by ex-members as being a largely ineffective group set up to create the impression that the government is doing something about anti-Muslim hatred, but whose research has gone unfunded and its opinions and meeting requests ignored.

It would seem that Hope not Hate’s endorsement of the state narrative may be due to Mr Lowles’ close proximity to the government. In fact Hope not Hate (HNH) seems to have dedicated very little of its efforts to criticise government counter-terrorism and immigration policies, which have created an atmosphere for Islamophobia and anti-immigrant hate to flourish.

This lack of appreciation for the wider context that contributes to the ‘state of hate’ is glaringly obvious in research director of HNH Matthew Collin’s article for the New Statesman. He absolves both Theresa May and Nigel Farage of the responsibility of mainstreaming far right narratives because neither “have called for the extermination of immigrants, asylum seekers and fellow politicians”.

By failing to understand the context, HNH undermine their purpose and fail to address the actual causes and enablers of hate.

This, coupled with their endorsement of Ms Khan, sheds serious doubt over their willingness to challenge state-sponsored hate. It is unfortunate that an organisation which does positive work challenging far-right racism and neo-Nazis, undermines that work by embarking on an ideological attack of genuine grassroots Muslim organisations.

In the HNH publication, Ms Khan appears to buy into the good-Muslim, bad-Muslim point of view that forms the foundation of the government’s entire counter-terrorism strategy. Her repeated regurgitation of Daily Mail smears against certain individuals and organisations, demonstrates her lack of deep understanding of Islam and exposes her authoritarian agenda where only views compliant with her understanding are the “norm”. She also appears to support the ill-fated belief that it is the government (and the courts) that should decide what is acceptable religious practice and belief, and not Muslims themselves.

Read more: Why is CAGE being targeted by the British political establishment?

Ms Khan singles out certain individuals and organisations, stating that they “represent the Islamist far right and continue to threaten not only our security but also hamper our ability to foster a climate of compassionate co-existence and cohesive communities”.

In coining the term ‘far right’ in relation to Muslims, Ms Khan waters down the threat posed by neo-Nazi groups, emboldens them, and purposefully blurs important lines separating Islam from racist ideology.

Moreover, her insistence on “compassionate co-existence and cohesive communities” is surprising given the fact that earlier this year Ms Khan endorsed a call for ‘war’ against CAGE: 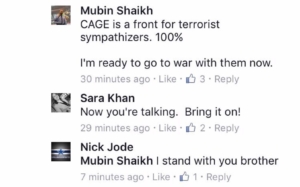 Screengrab taken from Facebook. Read more about the background of this conversation.

By taking aim at certain ideologies as being at the root cause of political violence and by employing the derogatory ‘Islamist’ label to individuals and groups, Ms Khan completely ignores issues of political disenfranchisement and grievance at foreign policy, which we have seen time and again are important factors among the many causes of violence.

Instead of acknowledging these complexities, which would have been a constructive move towards critically engaging with them, Ms Khan resorts to clichés and misrepresentations to insinuate that certain individuals and groups are a ‘conveyer belt’ to violence, buying into the alarming point of view that certain beliefs should be criminalised and ideas suppressed.

She does this despite such a hypothesis lacking empirical basis. The research that informed this model of radicalisation, even by the admittance of the academics that ran it, cannot be applied to broader society.

In so doing, she simply replicates the government’s stance, which is to ignore grievances in favour of a securitised response that antagonises Muslims and validates the far right’s hatred towards them. This is startling coming from an organisation that purports to tackle discrimination.

The narrative posited by the report regarding Muslims is directly linked to movements Hope not Hate condemns. The report rightly exposes the far-right counter-jihad movement and its worrying shift towards the mainstream with the rise of the President Donald Trump. However the movement is directly linked to those who work for the Henry Jackson Society, which has been influential in determining counter-extremism policies – the very policies which have now formed the framework through which Hope Not Hate has targeted Muslim activists.

In other words, the report is shockingly perpetuating policies premised on the Islamophobic assumptions used by the very groups it condemns.

Hope not Hate is urged to reassess its propagation of far-right-linked narratives using discredited and unqualified assets of the state.