Nura Al-Izzedin describes the chilling situation in Austria and how the dehumanisation of Muslim children has made them vulnerable to state violence with little to no public outcry. She argues that the criminalisation of Austrian children under the pretext of ‘counter-terrorism’ and for the purposes of deportations must be met with equal opposition.

This article is published as part of CAGE’s new series of expert essays ‘Perspectives on the War On Terror‘. You can sign up to our Perspective mailing list here so you never miss a new essay.

On 9th November 2020, Austrian police stormed children’s bedrooms at 5am.

After the raids, Austria’s Interior Minister Nehammer proudly revealed at a press conference that he was “present during the action taken against political Islam”, where more than 930 police officers were on duty, as part of Austrian security services “Operation Luxor“. 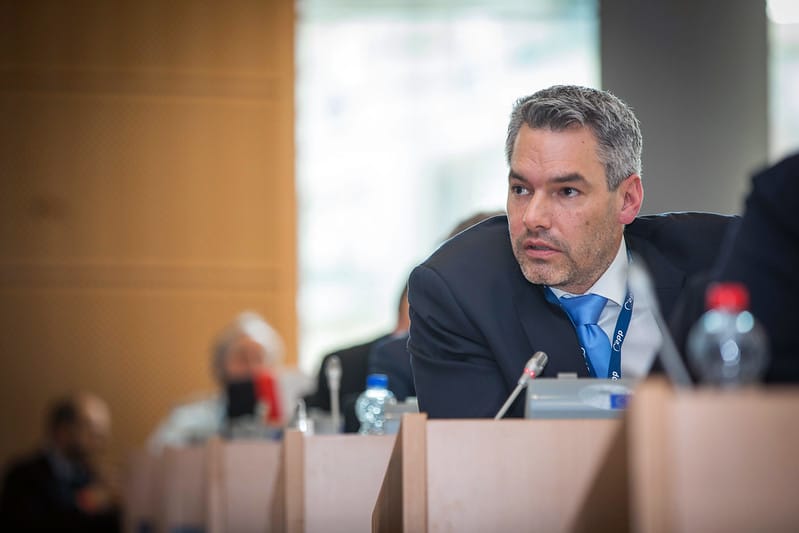 According to prosecutors, all of the accused were under surveillance for at least one year and were observed for over 21,000 hours, meaning the police knew the affected persons were not in possession of weapons or any other dangerous objects at home and were aware of the presence of children and babies in the family homes.

It was also then revealed that no weapons or explosives were found. No arrests were made, despite highly aggressive interrogations.

The manner by which the police carried out the raids were highly questionable, particularly as the police had enough information prior to the raids being carried out, to not warrant such a needlessly aggressive raid.

Due to that the impacted persons reported that they and their lawyers weren’t given access to the files against them for over two months, until 22nd of January 2021. 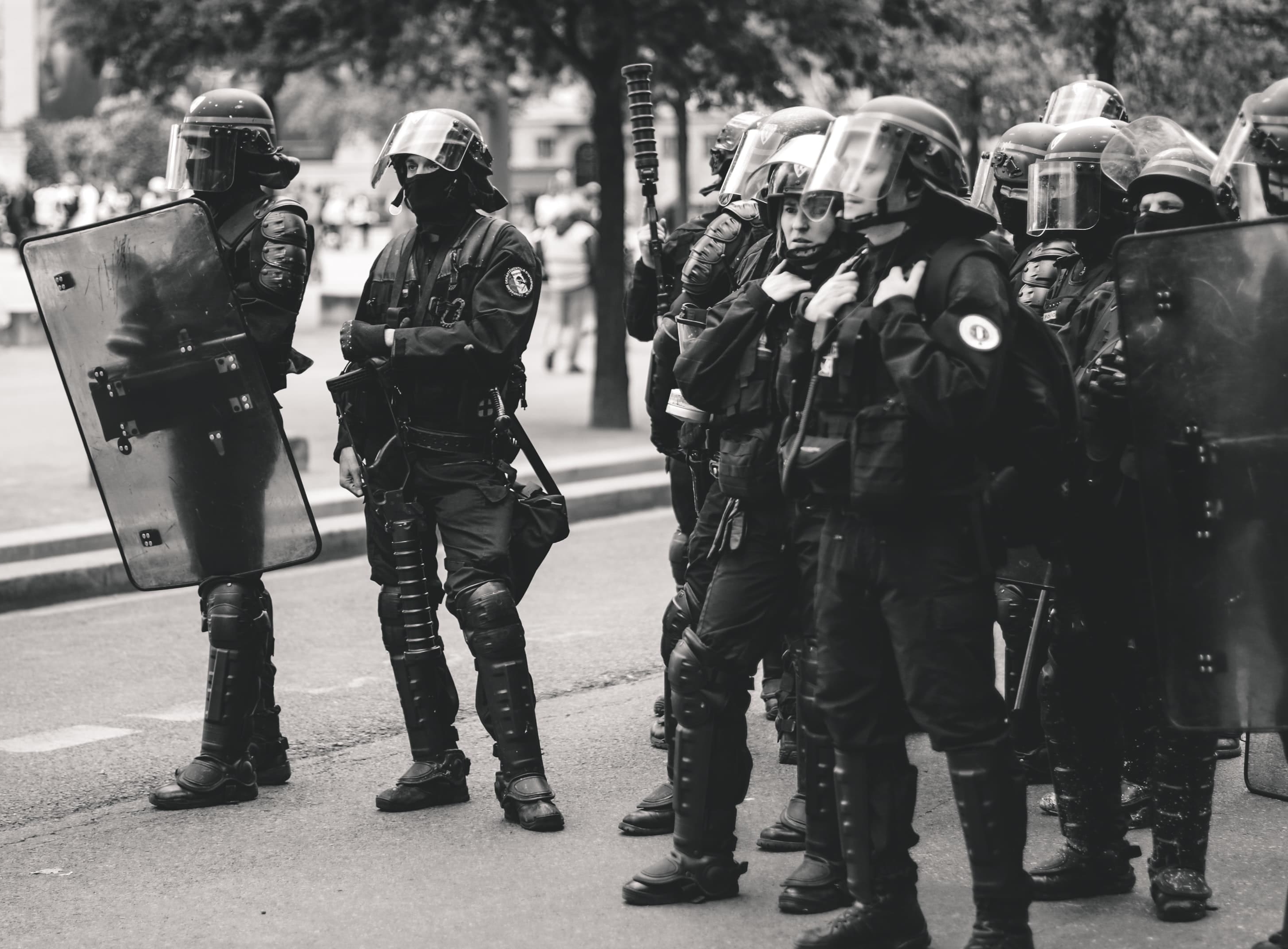 Read more: Egyptian and Israeli complicity: The unfolding of a major crackdown on Muslims in Vienna

Through the excessive and unnecessary use of force in the raids, the police willingly and purposely chose to violate the principle of acting within the best interests of children in those homes – as enshrined in the UN Convention on the Rights of the Child, among many other domestic and regional legal instruments.

Police broke the doors and windows of the family’s houses and threatened the children with guns. Nonetheless, they regarded these draconian measures as legitimate and proportional.

After studying the search warrants, it became evident that the raids were based on an ideological and political study of the Muslim Brotherhood by Lorenzo Vidino, a study which is already considered contentious in public discourse.

Some of the questions the police were asking the accused include: “How many friendships do you and your family maintain with autochthonous (long-established) or non-Muslim Austrians?” – begging the question why it is relevant for the police to distinguish between non-Muslim Austrians and Muslim Austrians – as well as “Does your wife wear a headscarf?” and “Should Austrian children or children who grew up in Austria be brought up to be martyrs?”, underlining the ideological and Islamophobic nature of the raids.

It is important to point out that this operation, one of the largest ever carried out in Austria and even Europe at the time, was wholly political in nature.

One further question asked was whether the individuals were: “In favour of waking the wife and children up for prayer times at around 4am?” – ignoring  the fact that the police were invading the family’s home at 5am to ask this question.

It goes without saying that children are suffering from psychological trauma since the raids; witness accounts even recall heavily-armed men wearing masks were pointing a gun at children and shouting, “target person spotted”.

Another boy recalled that “He was also wearing a mask so I only saw his eyes. Initially, my first thought was that he was a terrorist”.

Additionally, parents have reported that their children start screaming and crying in the middle of the night, while the children have said that the police took away their pocket money and electronic devices, meaning they could no longer continue with distance-learning, depriving them their right to education.

“Additionally, parents have reported that their children start screaming and crying in the middle of the night, while the children have said that the police took away their pocket money and electronic devices, meaning they could no longer continue with distance-learning”

Most families’ bank accounts were frozen and cash taken away, leaving them with nothing, and begging the question as to how they might sustain themselves.

On the 3rd February, Amnesty International published a report entitled A Human Rights Guide for Researching Racial and Religious Discrimination in Counterterrorism in Europe which states that “discrimination against Muslims in the counterterrorism context in Europe is a longstanding human rights concern.

In the last two decades lawful Muslim religious, cultural, and political activities and affiliations have been construed as “dangerous” enough to justify significant restrictions on individual rights.

It goes without saying that children should never be rendered guilty based on what their parents are being accused of – whether or not the accusations are substantiated.

Yet as a result of the terror-framing and dehumanisation of the affected children, they were subject to the abuse of power of the police – who were themselves excused, meaning that they did not have to answer for their abuses to either a governmental or non-governmental body.

Amnesty International highlighted in its report that “unfortunately, despite widespread acknowledgement of this issue from the UN and other European institutions, discrimination against Muslims has generally received less attention from human rights groups and oversight bodies.”

“In the never-ending ‘War on Terror’, Muslims continue to endure ethnic profiling & are disproportionately subjected to surveillance, limitations on their movements, arrest & deportation.” @eda_seyhan

This also encapsulates the situation in Austria right now. “ZARA” is the only NGO, which publicly condemned Operation Luxor thus far, and showed its support towards the newly-founded civil society initiative “Protect the Children”.

Besides ZARA and Protect the Children no other children’s or human rights organisation has yet publicly condemned the treatment of Muslim children as police actions were taken under the pretext of “counterterrorism”. To compound matters further, all the children belong to the same religious minority here, meaning the trauma permeates past the individual and into the community level.

One is filled with slightly more hope when Austrians recently expressed their outrage at Interior Minister Nehammer’s order to deport school children to Armenia and Georgia.

Journalists and politicians from different sectors strongly condemned the action.
Several members of the National Council and other well-known representatives from politics and the media mingled with demonstrators, also venting their anger via social media.

Police were present in the middle of the night with reinforcements of the WEGA (special units) including patrol dogs, with about 200 officers to proceed with the deportation of the children. The actions of the police during the deportations were also loudly criticised, underlining “disproportionate police brutality.”

The demonstration was eventually dispersed by the police due to the resultant “disturbance of public order.”

“Police were present in the middle of the night with reinforcements including patrol dogs, with about 200 officers to proceed with the deportation of the children.

Interior Minister Nehammer, who received backlash after the deportation of one of the children, blamed her mother for “letting it get so far”

Interior Minister Nehammer, who received backlash after the deportation of one of the children, blamed her mother for “letting it get so far”.

The lawyer of the 12-year-old girl who was deported to Georgia said: “The mother had not broken any laws and, even if she had made mistakes, this would not play a role in weighing up the best interests of the children.

The parents’ behaviour is completely irrelevant from a legal point of view. The parents don’t matter. The best interests of the child are paramount and should have been re-examined immediately before the deportation.”

It is about time that the children victimised by the ‘counter-terror’ raids of 9th November receive equal outcry from the public.

Nura Al-IzzedinAustrian Researcher
Nura is a researcher who has been closely following developments on-the-ground in Austria following the ‘Operation Luxor’ raids in November 2020.