PREVENT is about Policing Dissent not Safeguarding

Anti-war, Fracking, Pro-Palestinian, Anti-Austerity, Animal Rights; Aid Convoys – these have all been identified as “threats” under PREVENT.

Security and safety of people is a duty of the state, but it is also a responsibility of all citizens to report anyone they believe is about to carry out a criminal act. However, the responsibility of citizens duty extends to hold the state to account ensuring it does not go beyond the law and its role.

This can happen through the unnecessary targeting of individuals and the intrusion into people’s lawful expression of beliefs and practices, and the disruptions of their right to oppose to state policies.

Therefore, any opposition to state policies, such as PREVENT, must be seen within the framework of lawful expression and debate and not a reason to invoke ‘national security’ to silence dissent and smear dissenters as “extremists”.

PREVENT has had four major reviews. Each time the strategy has been rebranded as a public relations exercise, without changing its fundamental remit which remains the policing political dissent and religious beliefs.

In the first stage, it was presented as a community-based solution to violent extremism and community cohesion. In the most recent review or rebranding, PREVENT has been retrospectively marketed as Safeguarding. However, if it was safeguarding as defined under the Children’s Acts, then it would have been presented as such from the outset over 10 years ago.

Rather, this rebranding has happened in the last 2 years as the CTS Act has been rolled out into schools and universities where safeguarding is an existing legal requirement. Many professionals have spoken about this miss-fit and the subsequent fallout that has impacted thousands of children.

Now, new information seen by CAGE about the existence of Counter Terrorism Local Profiles (CTLPs) makes it clear that PREVENT is a policing responsibility and the outcome of it is the criminalisation of dissent.

This new evidence shows that public sector workers are being expected to be intelligence gathering agents and managers of religious and political views and dissent, in the same way as they were expected to do so under the communist regimes of the Soviet Union and Eastern Europe, run by the KGB and Stasi.

Amber Rudd, Home Secretary, confirmed as much in a Question Time panel debate about police numbers. Rudd insisted that the majority of low-level intelligence came from community leaders operating within the PREVENT counter-terrorism programme, rather than from police officers on the street.

CAGE has recently seen a questionnaire upon which a CTLP is developed, and a summary CTLP document provided to a local authority. This provides some insight into the way the security services and police have been using PREVENT to monitor, not just Muslim activism and charitable work, but dissent and “subversive activities” that go way beyond ideologies that “draw people into terrorism”. In other words, PREVENT is going beyond the S26 Terrorism Duty in the CTS Act 2015.

Thus far PREVENT analysts have paid little attention to this document which is drawn up by senior security services officers, with an intelligence analysis team. This makes it an “intelligence product”. 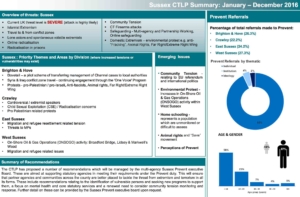 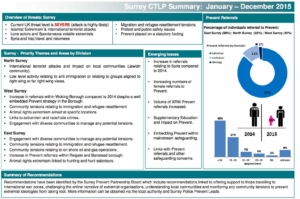 A full CTLP document is prepared for each local PREVENT area and a summary shared with the Chief Executive of a local authority in order to identify “extremist” ideologies and threats. The CTLP is not available to all the public sector or even to PREVENT officers.  Nor is it available to the public.

The information CAGE has seen as part of a CTLP process includes the following questions: –

“Is there any information regarding humanitarian aid convoys?”

“Are there any groups, individuals or organisations which are fundraising for Syria?”

“Is there any information regarding anti-war protests as pressure grows on the British government to widen the scope of drone strikes.”

“Is there any information regarding individuals or groups who are engaged in fracking protests which have the potential to become more radical and disruptive in nature?”

“Are there any emerging issues around communities, groups and individuals involved in:

This type of information is then reflected in the summary CTLP document CAGE has seen.  For example, identified under “priority themes” are: –

In attempting to answer the question of how public sector workers could perform a policing function, Charles Farr – serving as the director of the Office for Security and Counter Terrorism, Home Office, at the time – in a record of the Communities and Local Government Committee on Preventing Violent Extremism in 2010, admitted “local authorities had neither the skills nor the confidence to accurately identify individuals who may be a cause for concern”.

Farr went onto explain that the purpose of the Counter-Terrorism Local Profile (CTLP) was to bridge that gap in knowledge and intelligence amongst public sector staff, and that “every chief executive in areas receiving significant PREVENT funding has already got one”.

He went on to describe the CTLP as an “intelligence product” that would “improve over the next year”. Not only that, but he said that “chief executives and elected councillors, wherever possible, need to have that information”.

Farr said that feedback from local authorities in some areas like Luton show that CTLPs had “transformed the way they are doing PREVENT“.

“Counter-Terrorism Local Profiles [184] are still in early stages of development,” he said. “However, we see them as being vital to effective local delivery of PREVENT programme.”

In the recent case of Dr Salman Butt vs Home Office, Justice Ousley also identified the CTLP as the key link between “extremism” and the S26 Terrorism Duty. In other words, the CTLP facilitates and furthers the government’s highly disputable narrative that “extremist” ideas lead to “terrorism”.

The implications of the CTLPs

The use of CTLPs explains a great deal about the behaviour of local authorities, Universities, and the Charity Commission when dealing with Muslim communities and speakers deemed controversial, charities, and PREVENT referrals. It is likely that the full secret CTLP document contains actual names of individuals and organisations.

This is something CAGE and many Muslim groups have suspected for some time. It is also likely that the disruption of the work of Muslim charities and their staff, such as monitoring inspections, closures of bank accounts, seizure of cash at airports and denial of travel visas, is linked to CTLP-defined “threats”.

The media often highlight excessive or inexplicable stories of PREVENT Related Incidents (PRI’s), or Channel related referrals, and attribute them to overzealous application of the policy by public sector workers. However, this may not be strictly true, since there is the very real possibility that the nature of PREVENT Interventions is directed from the CTLP information supplied by the security services to the public sector.

The existence of CTLPs explains PREVENT referral cases such as the Palestine activist Rahmaan Mohammadi. This appears not to be the consequence of an overzealous school teacher or policy, rather the consequence of guidance from the intelligence services, via the CTLP.

It also explains the behaviour of local authorities and PREVENT Officers in relation to pressurising venues to cancel events with “controversial speakers”, since this information is being pushed by the security services through CTLPs. It may also explain the plethora of stories published in the mainstream media about Muslim “extremism”.

This new evidence makes it absolutely clear that the CTLP and PREVENT implementation go well beyond preventing political violence, and into the realm of pre-crime and the criminalisation of dissent and political and/or religious activism. This is beyond the S26 Terrorism Duty in the CTS Act 2015.

The CTLPs feed into an unjust system

Not only does this destroy the credibility of public service providers, but they are not trained to be intelligence operatives or carry out detective work. It also puts citizens at risk of being sanctioned and investigated for lawful activities. The end result is the erosion of trust in society.

Moreover, under PREVENT, people can be questioned/interrogated without the normal safeguards of due process, such as the right to remain silent or to have a lawyer present.

The CTLP document is secretive, and those groups and individuals who are highlighted as a risk or threat or even “extremists” have no recourse to challenge the information which is subsequently supplied to public authorities.

This puts public sector staff in the difficult situation of having to defend decisions which are clearly based on information supplied by the intelligence services. They are not allowed to reveal such information, yet at the same time they have to defend their decisions in a tribunal or court if necessary.

The individual affected by PREVENT is then also denied access to information about them and the process, on the basis of “secrecy”.

The number of PREVENT referrals and Interventions is huge and goes beyond anything that can be called safeguarding.  There have been 6,300 PREVENT referrals in 2017 so far, and 7,500 in 2016, but the volume actually being assessed for Channel intervention is 1,000 since 2012.

The fact that the State refuses to provide any monitoring information about the reasons for referrals since 2007, or discuss them shows that PREVENT cannot be considered safeguarding but is rather mass surveillance.

The entire exercise of co-opting public-sector workers to perform a policing role for which they are ill equipped marks the erosion of the spirit of public service and a move towards a Soviet style policing bureaucracy.  It is also a complete abuse of due process and a dire threat to civil society.

This constitutes a direct violation of Equality Duties to which all public-sector workers subscribe. Namely, that discriminating against a person on the grounds of their religious and political beliefs and activities is considered discrimination, harassment and victimisation.

For these reasons amongst others CAGE continues to call for the abolishment of PREVENT and a return to due process and equal justice.