Review: The War of Terror from within at the Imperial War Museum

An exhibition running between the 28th of July and the 28th August 2017 by the artist-photographer Edmund Clark on the impact of the War on Terror was held at the prestigious Imperial War Museum. The ironically named exhibition ‘The War of Terror’ was situated alongside moving exhibitions of the Holocaust, the two World Wars and a dedicated exhibit on the conflict in Syria.

On display were hundreds of images, documents and diary entries of survivors of house arrest, rendition, Guantanamo and secret detention sites. What draws your attention when it comes to the images on display is the focus on the setting and objects rather than the person affected. The absence of faces enables the visitor to think beyond the individual stories, and focus on the injustice of the systems and spaces that have come to characterise the ‘War on Terror’.

Read more: How the government makes you into a terrorist without ever arresting you

Of particular note is the way in which Clark’s explores the intimate space of the home as being invaded through house arrest and control orders. To emphasise this, a display room at the far end of the exhibition, was flood lit to set the mood of a very clinical environment and juxtaposed against an array of images of a house arrest detainee’s home. 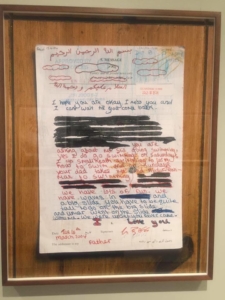 One particular exhibit was of extremely significant sentimental and historical value. An enlarged photographed letter from a young 7 year old girl to her father who was incarcerated at Guantanamo at the time. At the opening of the exhibition the man, our Outreach Director, Moazzam Begg, stood alongside his daughter, now a young woman, and the curator of the exhibition Edmund Clark, contemplating those desperate years. Such was Clark’s connection to the stories displayed in his exhibition that he broke down in tears seeing father and daughter reflecting together over such a painful period of their lives.

The exhibition transports the visitor into the lived reality of the War on Terror, a first person’s view of life from within the confines of the prisons and freedom eroding laws we have become worryingly accustomed to over the past 16 years.

Another aspect of the exhibition reflects on Britain’s response to both real and perceived terrorism threats from within the country. This time, Clark’s photography of the mundane from within the homes and spaces allocated to individuals placed under ‘Control Orders’ – a type of house arrest imposed on terrorism suspects using evidence they are not allowed to see – without charge or trial, causes the viewer to witness an imprisoned world. This world is not situated in some far off tropical prison galaxy, but in homes that resemble our own. This part of the exhibition is based on Clark’s book, Control Order House.

Read more: Out of control: the reality of control orders and TPIMs

Focussing on the spaces that make the prison rather than the faces inside them meant Clark’s approach to his subjects was unique. “I’d been photographed by more people than I can remember in all sorts of places by all sorts of media organisations. And they [all] wanted to photograph me the, individual, the prisoners. Ed wanted to photograph everything but us. [He photographed] the space around us and I found that completely fascinating,” said Moazzam Begg in conversation with Ed Clark during the Art, Justice and Terror discussions at the Imperial War Museum.

The exhibition has now come to a close, however it is a success knowing that thousands of visitors to the Imperial War Museum over the busy summer months would have left with an increased awareness of what has been done in their name, ostensibly to combat so-called “terrorism”. We are glad to have been given the opportunity to contribute.