Support for Ukraine in schools

Speaking on the case of a girls’ secondary school in Birmingham, one respondent mentioned how:

‘They deflected questions and didn’t give students the answers they were looking for when asked why funds were being raised for Ukraine and they weren’t even allowed to wear badges for Palestine. The only time where they directly spoke about Palestine was in an email about a year ago and it was discouraging any efforts made to raise funds. The double standards are uncanny.’

The same respondent also included the following anecdote from a student at the school, which suggested that the deputy headteacher had themselves acknowledged the error of the school’s past approach (towards fundraising for Palestine), albeit without being entirely forthcoming about their shortcomings:

‘So when I emailed the teacher who organises charity events, the following morning the deputy head spoke to me and told me that the school has learnt from their past mistakes and that they will be taking action on such events quicker in future. After a long conversation, she admitted the school’s wrongdoing and said that the large amount of awareness and support shown on the current Ukraine-Russia situation had nothing to do with race and religion, rather it was about ‘people.’ But when I asked about why the school discouraged any sort of support for Palestine previously, she just went off topic so I didn’t get an answer.’

Another parent’s response regarding a school fundraising for Ukraine exemplified the stark over-policing of Palestine solidarity, giving the following anecdote from the school’s actions in 2021:

‘My daughter was actually [reported] to Child safeguarding officer [last] year [as] she discussed how her dad was [raising] money for Palestine, her teacher thought she was afraid and scared by being exposed to the conflict in Palestine. I had a long discussion and an apology was given by the headteacher.’

Comparisons between Vladmir Putin and Adolf Hitler were alleged in some responses – with one claiming that ‘[Teachers] said that the [Russian] Prime Minister Putin is acting like Adolf Hitler because he is land grabbing’ while another alleges being told ‘That the PM of Russia is akin to Adolf Hitler [because] he rules through fear and that the PM of Ukraine is good as he is on the front line’.

A further response alleges that their school ‘Related [the] Ukraine situation to [the] Taliban and [bombing]’.

‘[The school] organised a collection for Ukraine but we were unable to do the same for Palestine as it was ‘political as it was due to religion’. We asked to do an assembly or put posters up and fundraise for Palestine and they said no but they are doing it all for Ukraine.

While another related that

‘My granddaughter actually emailed and approached the school last year requesting them to hold an assembly one minute silence for the children who had lost their lives during the bombardment by Israel.

She was told that “politics should not be brought into the schools and schools should be neutral”. She also questioned why the Palestinian flags that were put up on the walls of the classrooms including in teachers offices were removed the next day?

She was told that it is a sensitive situation whereby they do not want to hurt the feelings of certain members of staff who were Israelis.’

‘When the protest went on for Palestine I tried to do an assembly based on it but got told it’s too political and they do not go into political stuff like that. I also wore the [keffiyeh] and got told to remove it as it was not school uniform however also shows your injustice [sic].

Now that the war in Ukraine has taken place my school has decided to speak up about it, wrote it in newsletters, do assemblies based on it, wear badges representing the country, making food banks to [support] them and holding a cake sale to provide Ukraine with money.

They did all of this for Ukraine even though it was political but one gesture for Palestine like wearing the badge or [keffiyeh] you will be reported to the teachers.’

A further respondent describes how their child’s school

‘[Raised] money for Ukraine. My son said that he carried about £300 from his classroom to the headteacher office […]
Last year, children tried to raise money to help families that were attack[ed] and had their houses destroyed in Palestine, but the School prevented and [even] threaten[ed] the organiser to take disciplinary actions.

Their excuses were that schools should never be involved in charities that help people in conflict/war zone even if the help is humanitarian help for civilian[s]. ‘

‘[There] is something to be said about the unique way in which Palestine solidarity is not just treated differently, but actively securitised…The attack on Palestine solidarity under the guise of bureaucratic maneuvering is deeply cynical and invoking school policy or law to censor students has proven deeply confusing for students, parents and even teachers. More concerningly, it threatens to undermine the principles of civic education that should be at the heart of the education system’

The open embrace of Ukraine and Ukrainians as an issue to support validates our conclusion made then – especially when compared with the fear, securitisation and outright Islamophobia that accompanied expressions of Palestine solidarity.

Schools working with organisations connected to the Ukrainian far-right 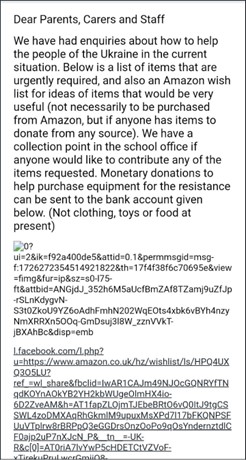 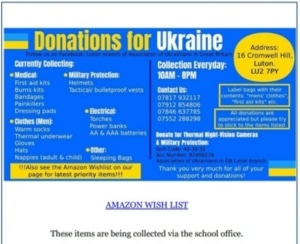 Example 1: Newsletter sent to parents by a primary school in Luton soliciting ‘Monetary donations to help purchase equipment for the resistance’ and linking to a donation drive collecting equipment for ‘Military Protection’, including Helmets and Tactical/bulletproof vests. 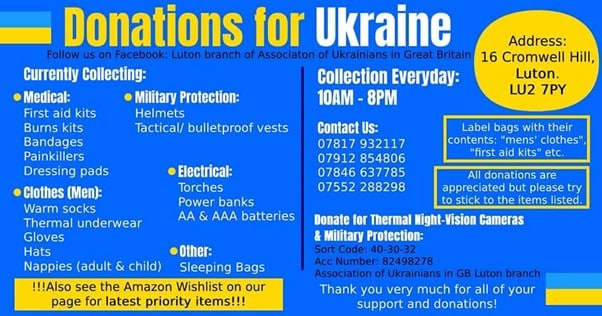 Example 2: Same poster provided to parents at another Luton primary school, advertising the donation drive by the Luton branch of the Association of Ukrainians in Great Britain 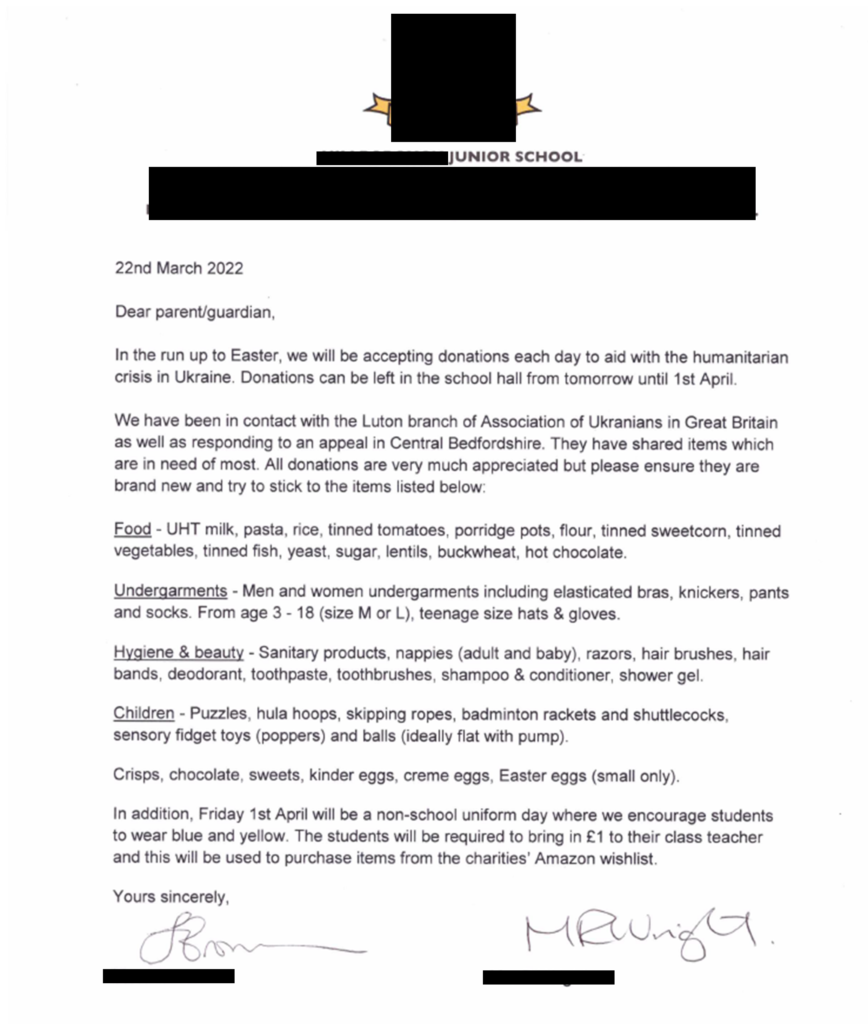 Example 3: Another Luton primary school working with the Luton AUGB, without the appeal for military equipment donations. 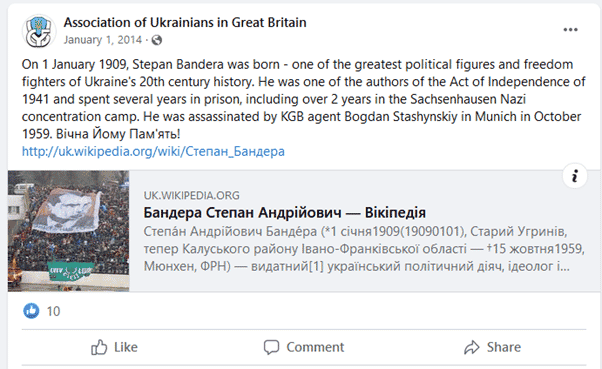 Image 2: Post from AUGB Facebook page dated December 2012 on event hosted at AUGB headquarters by Vasyl Oleskiw/Oleskiv, described as ‘one of the founders of AUGB, who worked alongside Stepan Bandera, and himself a former leader of the Organisation of Ukrainian Nationalists.’ 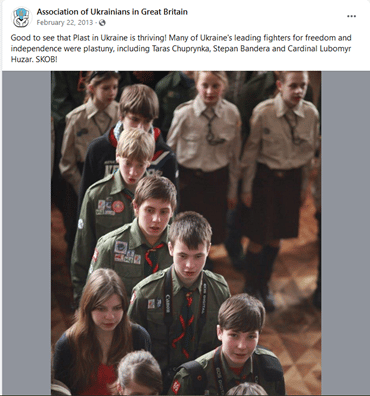 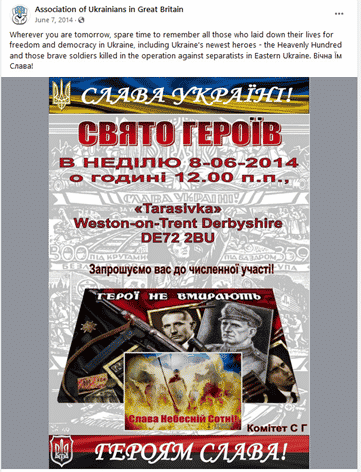 Image 4: AUGB Facebook post dated June 2014 commemorating ‘all those who laid down their lives for freedom and democracy in Ukraine’, with a poster featuring Stepan Bandera (right). 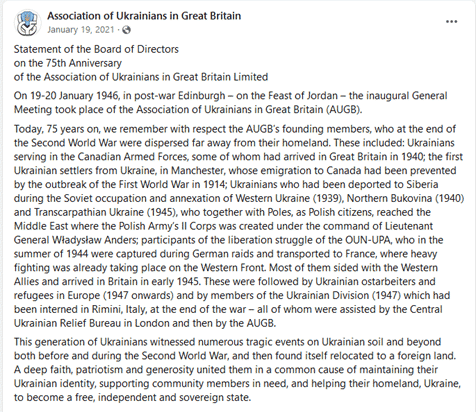 Image 5: Statement by AUGB Board of Directors dated January 2021 to mark its 75th anniversary.

Text reads: ‘‘Today, 75 years on, we remember with respect the AUGB’s founding members, who at the end of the Second World War were dispersed far away from their homeland. These included:[…]Ukrainians who had been deported to Siberia during the Soviet occupation and annexation of Western Ukraine (1939), Northern Bukovina (1940) and Transcarpathian Ukraine (1945), who together with Poles, as Polish citizens, reached the Middle East where the Polish Army’s II Corps was created under the command of Lieutenant General Władysław Anders; participants of the liberation struggle of the OUN-UPA, who in the summer of 1944 were captured during German raids and transported to France, where heavy fighting was already taking place on the Western Front.’ 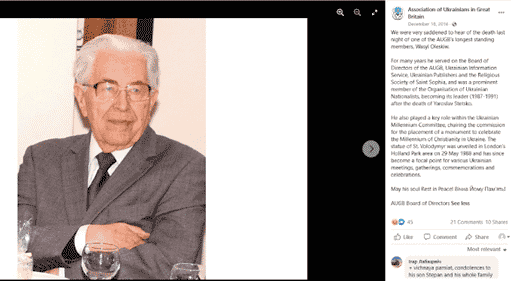 Caption reads: ‘We were very saddened to hear of the death last night of one of the AUGB’s longest standing members, Wasyl Oleskiw.

For many years he served on the Board of Directors of the AUGB, Ukrainian Information Service, Ukrainian Publishers and the Religious Society of Saint Sophia, and was a prominent member of the Organisation of Ukrainian Nationalists, becoming its leader (1987-1991) after the death of Yaroslav Stetsko.’

Tackling ‘disinformation’ in schools in the context of Ukraine

ISD has worked extensively with social media providers on countering extremist/terrorist content online, is well connected with governments internationally, and its staff list includes individuals drawn from many of the major counter-extremist organisations such as the now-defunct Quilliam Foundation.

TBI has issued a report accusing law-abiding Muslim organisations such as CAGE and the Islamic Human Rights Commission of sharing rhetorical frames and cues with the proscribed terror group Al Muhajiroun, in an attempt to whip up consent for the greater policing of Muslim civil society organisations.

‘We were not allowed to discuss Palestine at all last year. We were specifically told to shut down any conversation about that conflict immediately and to remain neutral.

The deputy head of humanities…said in front of staff that the BBC were being biased against Israel and that students are being misinformed via social media and BBC. But now the BBC is playing the Ukraine narrative it is now the go to for correct information.‘