Brother Hanif recalls his experience when plain clothed officers turned up at his door unannounced and aggressively tried to get him to comply – and how, with the assistance of  a CAGE caseworker, he was able to send them on their way.

I could hear there was purpose in the knocking

It was my first day of work. I was settling in and getting to know the role and the team – virtually. Alhamdulillah, everything was going well, and I was looking forward to starting work, especially after months of lockdown.

Before my lunch hour, my manager called to check up on how everything was going. During this call, there came a loud, urgent knock at the front door. I decided to ignore it, as I was “at work” and busy.

I continued to listen to my manager talk enthusiastically about work, but I began to lose focus and then lost focus completely, as the knock increased. I could hear there was purpose in the knocking. I decided to tell whoever was banging on the door that at that moment, it wasn’t a good time, and so, phone in hand, I headed downstairs.

I asked my manager for a second, and then I opened the front door. There were two plain clothes men outside, and I told them that it wasn’t a good time.

In a very aggressive manner, they said that they had to me speak now, and it was important.

I recognised the visit for what it was – doorstepping.

When I asked what it was about, they told me they were the police. They held up a badge, and said they need to speak to me by name.

I’d started off the dialogue being assertive, but I was thrown off by the badge and their tone, I was put on the back foot.

My manager was still on the line, so I quickly told her I’d have to call her back. I was very embarrassed.

Alhamdulillah, after the initial shock, I recognised the visit for what it was – doorstepping.

I had read about this kind of thing on the CAGE website and in my head I knew I didn’t have to talk to them, but I couldn’t quite remember how I should approach the situation best.

The officer kept emphasising that “this is not something we want to do out here”, implying that I should let them into the house. They said it was “for your (i.e. my) own good” to get a mask and come with them into the back of the van.

I stalled a bit, to give myself time to decide what to do. That’s when the officer decided to explain himself; he said the only reason they wanted me to come with them, was because they didn’t want to come inside because of the risk of Covid.

I felt like they were trying to give me the impression that they could come in if they wanted to. It was clear that they were putting pressure on me, to scare me into doing their bidding.

I realised only later, with a clearer head, and after speaking to CAGE, that if the reason for me having to come with them immediately was Covid-19, then why were they standing within two metres distance of me, and why were they asking me to come into what would probably be a confined and poorly ventilated space at the back of their van?

In the moment, being told by plain clothes men to come with them to their van was scary, and in my confusion, I told them I’d grab my mask.

After closing the door to keep out the biting winter conditions, I tried to call a close brother, but was unable to get through. Instead, I hurriedly googled ‘doorstepping cage’ (or something to that effect) and found and scanned the article I’d read some months previously.

I was like a nervous student rushing through his notes in the minutes before an exam, trying to find some info, but not actually registering anything.

At the bottom of the article was the helpline number. I called it desperately hoping someone would be free to pick up.

Through the Mercy of Allah, a caseworker picked up the call

Again, the officers knocked on the door – the banging was loud and urgent. Through the Mercy of Allah, a caseworker picked up the call.

In an embarrassingly shaky voice I began trying to explain what was happening. I’m not sure I explained it nearly as clearly as I could have, but the caseworker at CAGE asked the right questions and told me that they could stay on the phone to advise me, whilst I go back to the door.

Alhamdulillah, they let me know clearly that I wasn’t obliged to speak to the officers, and the caseworker helped me to send them back on their way.

The language the officers used made it come across as if they were doing me a favour by taking me to the van. Also, they weren’t clear if I was obliged to speak to them or not, and if there were even any accusations against me, or what the exact reason was for me having to go with them.

They told me I had been “hostile” for closing the front door to get the mask. They also claimed that they weren’t trying to pressure me into anything, when their language clearly was aggressive and accusative; I felt like I’d done something wrong from the start, but wasn’t sure what it was.

Once they were gone, CAGE advised me what to do, putting me in contact with legal professionals and also offering moral support and reassurance.

The caseworker spent over an hour speaking to me, advising me on what to do, letting me know my rights, and explaining that what had happened was simply an act of harassment and bullying.

May Allah bless and reward the brothers and sisters at CAGE for the amazing work that they do, and the dedicated and caring support they provide for the community.

The work they do is of much value and is truly there to help the Muslim community to navigate life whilst surrounded by institutionalised Islamophobia.

Have you or anyone you know been door-stepped by the police or have faced the brunt of ‘counter-terrorism’ laws?
If so, then please contact our caseworkers for advice and support: 0300 030 2243 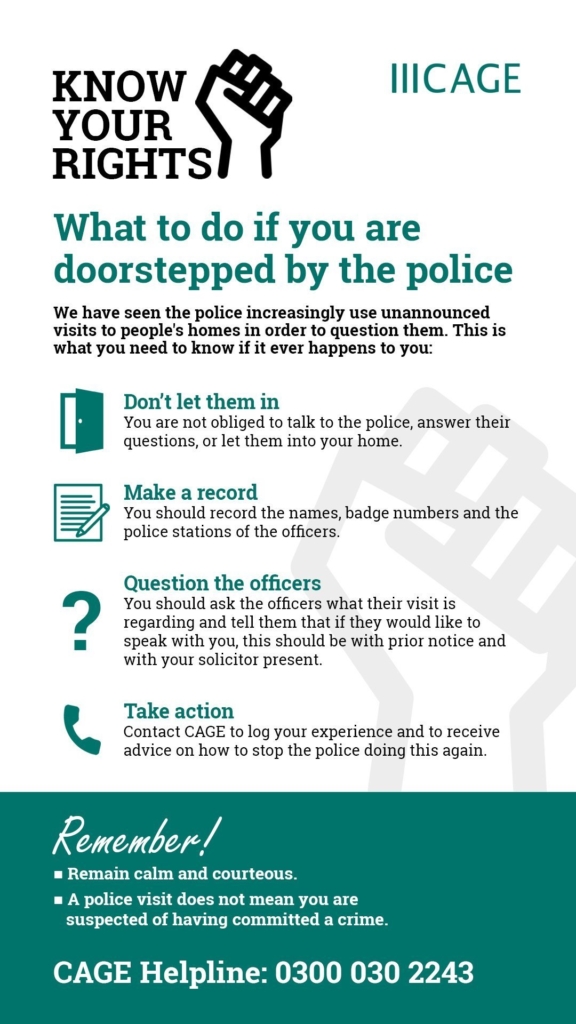