Integrating prison abolitionism into our struggle for justice

Being locked up alone in a tiny cell, 23 hours a day, without any human touch, and only minimum contact with the guards around you… for months, for years, sometimes even for decades. Can you imagine what that’s like?

…No?  Then listen to the people who’ve lived through it – the long stretches of eerie silence in your cell, the loneliness as weeks and months go by without speaking to a single person, the feeling of the walls closing in on you.  The total loss of the concept of time aside from sleep and awakeness.  Hearing the people in the cell next to you lose their mind, and wondering if you’re next.

Last week, the European Court of Human Rights (EHCR) released its ruling on Babar Ahmad and Others v. the United Kingdom.   The court held unanimously that there would be no violation of Article 3 of the Convention (prohibition of inhuman and degrading treatment) if the alleged terrorists were extradited to the United States, neither as a result of the conditions they would face in federal “supermax” ADX Florence, nor based on the multiple life sentences they might receive. Although the applicants can appeal to the Grand Chamber, the men will likely be extradited to the United States within the next few months.

It’s a disappointing ruling on the part of the EHCR, especially since the extended use of solitary confinement has been widely recognized as an infringement on basic human rights.  Last year the UN Special Rapporteur on Torture, Juan Mendez, called solidarity confinement torture and called for a complete ban on its indefinite use. In the United States, at least 25,000 people are held in solitary confinement every day.  [Compare that to the total prison population in all of the UK – around 97,000.]  Some individuals – like Herman Wallace and Albert Woodfox of the Angola 3 – have spent nearly 40 years by themselves in 6×9 foot cells.

I’m sure our readership at Cageprisoners is familiar with the horrific and abusive conditions at Guantanamo, Abu Gharib and Bagram.  But as the ruling by the ECHR makes clear – and as I address in my recently released report – the injustices happening to detainees of the War on Terror by the United States aren’t new practices for other Americans. After all, Florence ADX preceded Guantanamo, Bagram and Abu Gharib; before the War on Terror there was the War on Drugs; and only in recent years has white America been inculcated to fear Muslims with the same ferocity that African Americans have long faced.

As seen in the graphic below, the US has the highest per capita incarceration rate in the world – no other country in the world comes close.  Nearly 1 out of every 100 Americans is behind bars.   Among African American men in their 30s, this number rises to 1 in 10, and in some cities nearly 3 out of every 4 Black men will serve some time in prison. 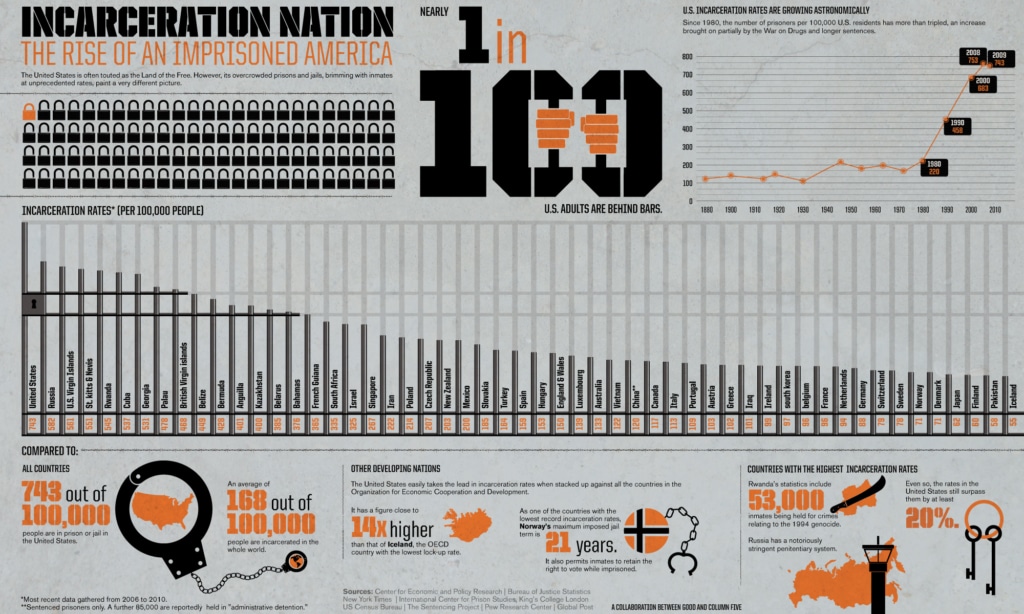 Yet the racialized nature of imprisonment is unsurprising, if you consider the institutional role that prisons have played in the United States since Emancipation.  While the 13th Amendment officially outlawed slavery and is seen as a turning point in the racial history of the US, it actually allowed the continued use of unfree labor as punishment for crime.  With the 13th Amendment in place, the state gained new agency in an old practice: it now directly facilitated the de-facto enslavement of poor Southern blacks, by leasing prisoners to white businesses.   Plantation owners and political leaders created Black Codes that increased the penalties for minor and poverty-related crimes, including vagrancy, loitering and public drunkenness. Black men and women served in convict chain gangs, which both visually and economically mimicked the racial order that existed prior to Emancipation.

Incarceration in the United States only began to reach the epic proportions of today within the last thirty years.  Despite the fact that property and violent crime have been in decline, the US prison population has actually quadrupled since 1980.  The racialized mandatory minimum sentences that accompanied the War on Drugs have driven the surge in the prison population.  For example, between 1986 and 1991, African American women’s incarceration rate in state prisons for drug offenses increased by 828 percent.

As prison populations have skyrocketed, the link between private profit and unfree Black labor has intensified.  Private prison companies like the Corrections Corporation of America (CCA) play an ever-increasing role in housing prisoners, and thereby have a vested interest in maintaining high prison populations.  In some cases, private prison corporations are directly influencing legislation for their own benefit, giving new meaning to the term prison-industrial complex.  In 2010, the two largest private prison companies made over $2.9 billion in revenue.  [To learn more, watch Al-Jazeera’s recent special on incarceration in the United States.]  The War on Terror feeds right into this cycle of racist hysteria, incarceration, and private profit.

Since the very moment of Emancipation, prisons have served as the primary means to contain and extract profit from impoverished and marginalized Americans of colour.  That’s why no prisons at all – supermax or otherwise – are part of my vision for a racially just future. As Angela Davis has written in describing her anti-prison work, “I choose the word `abolitionist’ deliberately. The 13th Amendment, when it abolished slavery, did so except for convicts. Through the prison system, the vestiges of slavery have persisted. It thus makes sense to use a word that has this historical resonance.”

Resistance on the inside, support and solidarity from the outside

American courts have been unwilling to stem the use of supermax prisons despite the clear evidence that they cause long-term psychological damage.  But people on the inside are resisting – they are drawing on their limited agency to demand humane treatment.  Last year, inmates at Pelican Bay prison in California went on two peaceful hunger strikes; at least 12,000 inmates in 13 of California’s prisons eventually jointed in solidarity with them.  One of the five core demands of the hunger strikers was for the California Department of Correction and Rehabilitation  (CDCR) to end the use long-term solitary confinement and make the use of segregation a last resort.  In March 2012, in response to the strikers, the CDCR published its proposed changes.  Despite hopes that that the CDCR would dramatically reduce the number of people in solitary and put in place effective rehabilitation and re-entry programs, the proposal will not make California’s isolation units any more humane. [Read Amnesty International’s analysis of the proposed changes here.]  A February 2012 letter from a hunger strike representative at Pelican Bay called for people on the inside and supporters on the outside, to continue resisting the abusive conditions in solitary confinement:

People are indoctrinated, brainwashed into believing they are weak or powerless — that prisoners in this state are evil and deserve to be punished and treated as some type of sub-human animal, based on their felon status.  By People, I’m referring to prisoners, their families, friends and supporters, as well as the general public at large! This is the wrong way to see things and it has to change!

I don’t agree with this type of mind set!!  We should never accept being abused or mistreated. It’s our duty as human beings to FULLY  RESIST!!  Our Hunger Strike activity over the past year has shown that solid resistance is not only possible, but also very effective, and it can be done in smart, fully advantageous ways.  It simply requires prisoners to come together collectively, for the common good of all and with the support of the people outside, have a powerful force, to force the changes that are long overdue…

… Our compliance and recognition of the prison’s power over us is our downfall. If we collectively refuse to comply, and refuse to recognize the prisoncrats having any power over us via refusal to work, refusal to follow orders, then these prisons can not operate! Our goal needs to be to force major changes, beneficial to prisoners and our families and loved ones regarding prison conditions and the amount of time people serve! Our supporters outside need to make a hard core, serious stand on the same agenda….

Fighting for justice for Babar, Pelican Bay and all other prisoners…

If the recent ruling by the European Court of Human Rights demonstrates anything, it’s that advocacy for the due process rights of War on Terror detainees must be pursued in tangent with the broader struggle for prisoners’ rights in the United States – which is why it’s not enough for us simply to advocate for the closure of Guantanamo Bay.   The Muslim bogeyman might have replaced the crack mom or the gang-banger as our greatest site of fear and social stigma, but then it’s just the next iteration in the wider relationship between racism, prison, and private profit.   As Tarek Mehanna pointed out so eloquently when he was sentenced last week, this is ultimately about the power struggle between the oppressed and the oppressor.

That’s why we have a responsibility to support the wider struggle against all prisons, including supermax.  How?