Make no mistake: Trump is no friend of the Syrian people

The Assad regime has once again demonstrated its depravity by bombing the town of Khan Shaykhoun in Idlib using chemical weapons, killing at least 58.

One of the most emotive scenes to emerge was that of Abdul Hamid Youssef who lost his young twins and 25 members of his direct family. Speaking to CNN he said:

“There was foam on their mouths, there were convulsions. They had all been on the floor,”

“My kids, Ahmad and Aya, and my wife… they were all martyred.”

However he was defiant despite his grief when asked about leaving Syria. Embodying the spirit of true believers Abdul Hamid said: “Why would I leave my home? We were born of this land and we will die for it.”

“Let him (Assad) come, him and Europe, with his sarin gas ten more times.”

His story is one of defiance against all odds, a story that has become synonymous with the revolution in Syria.

But the reaction of the United States to this human tragedy is astoundingly hypocritical. The sympathy of Trump towards the Syrian people is only as truthful as the sympathy American fighter jets have meted out to the civilian victims of American aggression in Aleppo, Raqqah and Mosul.

Moreover, once the survivors flee their lands and the bombs raining down from the US coalition, Russia and Syria, they are then faced by Trump’s ‘humanitarian’ #MuslimBan.

Trump using a human tragedy for his own ends

To date the US lead coalition has conducted approximately 7,900 airstrikes in Syria, killing 260 civilians in Syria in March 2017 alone. Most notably was the strike on a Mosque in Aleppo that resulted in the reported killing of 56 worshippers.

The USA has now been militarily involved in the Syrian conflict for at least 31 months with its presence ever increasing. The civilian death toll has been immense with a reported 2000 killed last month across Syria and Iraq by coalition forces.

Read more: US military attack “killing 56” at Syrian mosque is a war crime

It is therefore extremely naive to describe the latest American airstrikes as humanitarian in nature or even as an attempt to exact ‘justice’ against the depraved regime of Bashar Al-Assad.

Such ‘decisive’ action has not followed the brutal massacres in Aleppo, because it would seem the weapons used there were crude barrel bombs and conventional artillery. The message is clear: so long as Syrian’s are not killed by chemical weapons, western ambivalence to the crimes of the regime will continue.

When it comes to its actions, the US ‘red line’ seems to be concerned with appearances rather than substance.

The limited strikes, carried out overnight, serve only to strengthen Trump’s image as a ‘strong’ president in contrast with the perceived inaction of Obama. The strikes have not damaged the regime’s capacity to mount airstrikes, nor will it protect the lives of innocent civilians.

At midday yesterday, the Syrian Observatory for Human Rights reported that Syrian warplanes had taken off from an air base hit by US to carry out strikes in the Homs countryside.

“In bombing Syrian civilians the regime primarily relies upon Hama Airports (for barrel bombs) and Al-Dameer, Al-Seen and Khalkhala (for fighter jets). What took you to Al-Shi’rat?”

Reports have also emerged that the regime, which lost only 6 men in the strikes, was alerted and evacuated the targeted airfield before the strikes.

Moazzam Begg, CAGE’s outreach director added in a Facebook post, “…America kills 6 Syrian soldiers with 59 missiles? They normally get far more than that by mistake.”

Assad, once an ally and now a convenient enemy

The US worked very closely with the Syrian regime in the War on Terror. In fact the US notoriously renditioned four Canadian citizens, one of them from the American mainland, and one other German citizen to Syria. They are, Maher Arar, Abdullah Almalki, Muayyad Nureddin, Ahmad Abou El Maati and the German Mohammed Haydar Zammar. They were taken to the infamous Fara’ Falestin, Palestine Branch detention centre, known for its indescribable degrading torture and treatment. 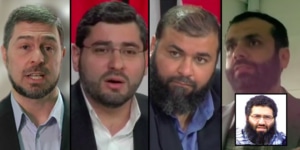 Another infamous case is that of Abu Mus’ab As-Suri, who was arrested in late 2005 in Quetta, Pakistan, handed over to the US and held at the US naval base on the British Islands of Diego Garcia. He was handed over to the Syrian regime and disappeared, in all likelihood tortured mercilessly for his support of the 1980’s Hama uprising.

This all happened behind the scenes while the regime was designated as part Bush’s of supposed “Axis of Evil”.

In recent years, Assad has become a convenient enemy. Although the coalition and Assad’s regime are bombing on the same side much of the time, in distancing themselves from his actions publicly, the USA is able to occupy a faux moral high ground.

A war of words between war criminals

While we now witness a diplomatic war of words and posturing between Russia, Syrian regime and the US, many more innocent civilians will be killed through their actions.

The regime’s response was a declaration that the strikes have “increased Syria’s determination to strike the terrorist agents”. They too have learned to co opt the language of the War on Terror to justify unlawful activities.

Syria has become an international bombing arena with countries involved in criminal actions with impunity.