Tackling racism remains one of the key challenges of our society. Refugees are still being left to drown or face squalor in camps such as Calais, while there’s been a rise in reported hate crimes in Britain since the referendum. We’ve seen racism come to the fore elsewhere – from police killings in the US to the ‘burkini’ bans in France, but there has also been resistance. Refugees have refused to be locked out, while thousands have taken to the streets in the US and Britain to say ‘Black Lives Matter’. Meanwhile, race hate crimes have been met by communities coming together to reject the scapegoating of migrants.

Come to the public meeting to discuss how we can build on all this to confront the rise in racism. 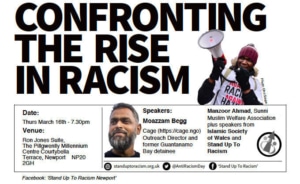