Muhammad Saif-ur-Rehman Khan was born in 1982 in Islamabad, Pakistan and lived there for the best part of his life. 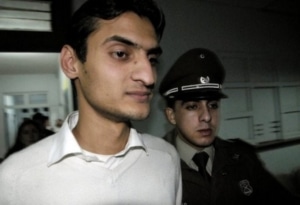 Muhammad Saif-ur-Rehman Khan was born in 1982 in Islamabad, Pakistan and lived there for the best part of his life. He obtained his British A-levels from the prestigious University College in Islamabad (UCI), an affiliate of the University of London, and successfully went on to complete a bachelors degree in Punjab University in Lahore.

Saif has done a great deal of touring the world, including visits to the United Kingdom, where he had also taken part in amateur fashion modelling, and the United States.
Miss Catalina Alliende, Saif’s college (UCI) principal, encouraged Saif Khan to travel to Chile to learn the Spanish language at eFronteras institute in Santiago and also to gain hospitality experience as an intern in the local hotel. Ms Alliende, who also happened to be the honorary consul of Chile in Islamabad, is someone whose advice Saif greatly respects and upon discussing the recommendation with his family he decided to make the move.

Saif, as mentioned, had already visited the US. He had been in 1996 and held a valid US visa several times as most flights heading to South America stop-over in the United States. He never had any problems
Before making the move to Chile, Saif stayed in the United States for a month visiting his brother, who is a PHD student there, and his family. This was in December 2009 and he continued on his way to Santiago, Chile, in January 2010.

On arrival to Santiago, Saif got a room in a boarding house and enrolled in a Spanish language course at the eFronteras institute, and upon completion he began an internship working at the front desk of a hotel. Having such a close and caring family, during this time Saif spoke to his family in Pakistan and brother in the US via Skype almost every day.
In February 2010, when the great earthquake struck Chile displacing over 1.5million persons, Saif displayed a character that can only be described as kind and compassionate in aiding the relief efforts.

Inquiries into Saif seem to have begun around March 2010 when the director of eFronteras was contacted by the police about him – information that was not passed on to him.

On Friday 7th May, Saif was approached by 3 Americans at the mosque in Santiago. The significance of this is not clear, but it was earlier on that very day that he received a telephone call from a man named “Bill” from the US embassy in Santiago requesting him to come in for some identification check-up and name-check on his passport. He was not informed of any issues with his visa whatsoever.

Saif sensed there was something strange about this call from the US embassy as there was no reason for it and so informed an officer at the Pakistani embassy who knew him, before arranging to go to the embassy 3 days later.

On the morning of 10 May 2010, Saif related the matter to the director at eFronteras institute, Alejandro Vicencio.
At 3.00pm later that Monday, oblivious to reasons why, Saif went to the embassy with his educational documents, as was suggested by the officer at the Pakistani embassy, and passport.

5 minutes into being taken to a secure room, “Mr Bill” told Saif that everything was fine took his documents to be photocopied. After waiting over an hour for something that shouldn’t have taken more than a few minutes, Saif tried to see what was going on, only to come across locked doors. He had been locked in.

Saif was told over the intercom to strip down to underwear and show each item of clothing to a security camera in the room. He was arrested at the embassy and it was alleged that traces of TNT and tetryl – a chemical that boosts the power of explosives – were found on his cell phone and documents. However it is important to note that there was no trace of these substances on his hands, body or clothes.

At the same time as Saif being in the embassy, his apartment was searched by the Chilean police who found no sign of any explosives. However, a second search on the same day – this time conducted by the Special Police – has allegedly uncovered traces of tetryl on several items of clothing, a small suitcase and a laptop. Both searches were without a warrant and judicial authorisation, and thus illegal.

On 11 May 2010 a US official said that Saif had recently been added to a US terror watch list and as a result his US visa was in the process of being revoked. It was further claimed that Saif, in accordance with US law, had been notified of the intention to revoke his U.S. visa and he was at the embassy to discuss the matter – something which Saif categorically denies. His US visa was valid for the next 5 years and he had received it from Islamabad only after thorough investigation.

Saif had been added to a US terror watch list around March 2010 for reasons undisclosed and has since been charged with possessing explosives.

These charges seem somewhat dubious for a number of reasons.

First of all, Saif has made it clear that when he was at the embassy a bomb sniffing dog was so uninterested in his bad that it appeared to fall asleep.

Secondly, while traces of explosives were allegedly found on his cell phone and documents that he took to the embassy, there was none whatsoever on his hands which surely raises the question of how the traces were transferred to the phone and documents which were confiscated from him

Thirdly, not only were the two searches of Saif’s residence carried out in complete disregard for the law and thus unreliable, but the first search conducted by the Chilean police came back negative. How is it that the second search conducted by the Secret police resulted in the finding of traces of tetryl on several items within the home? Is it possible that so many contaminated items could have been missed in the first search?

A logical conclusion would be that Saif has been framed, and this is a view held by many, including the Pakistan ambassador to Chile, Barhan-ul-Islam.

Even the Chilean PPD Deputy Felipe Harboe in Santiago has highlighted the need for thorough investigations stating that “our justice must conclusively state the facts, because here there have been many doubts”.

Apart from being framed, it doesn’t seem like there is another option regarding what has actually happened. Perhaps it could be said that a Chilean authorities have made a mistake; but if it has been a mistake, then it seems to only have been a mistake in terms of the wrong person being framed.

In light of the given events, the fact that until August all of Saif’s hearings were held in secret doesn’t support the integrity of Chilean authorities. Furthermore, the US ambassador to Chile, Paul Simmons appointed by the Bush administration was replaced around June, and the FBI chief in Chile, Stanley Stoy has also been back sent home.

If Saif was truly guilty of something then surely 6 months of investigation would have uncovered something. Indeed at the end of May when the prosecutor wanted to drop the charges against Saif, he was replaced with a new prosecutor; perhaps this is a telling event into what is going.

On 11 May 2010 Saif was ordered by a Chilean judge to be held under anti-terrorism law and was detained in the High Security Module located inside the Maximum Security Prison.

In response, Saif’s defence attorney Gabriel Carrion filed a Writ of Amparo against the decision to detain Saif without any proof and charges on 13 May.

Saif was officially charged on 15 May with possessing explosives and then released pending further investigation while being ordered to remain in Santiago and to check in with authorities once a week. Judge Maria Carolina Herrera further gave the prosecution 120days to develop their case. Saif’s defence attorney commented that the judge had declined to charge him with associating with terrorists due to lack of evidence.

On 22 May in a sharp turn of events Saif’s freedom was revoked after being declared a ‘danger to society’. After a court hearing he is escorted to a high security detention centre in Santiago, only to be released again on 1 June 2010. The Chilean Minister of Interior Rodrigo Hinzpeter attempted to have the decision overturned, but the Court of Appeals confirmed Saif’s provisional release.

With all previous hearings having been held in secret without any media coverage, on 3 August 2010, the first public hearing of the case was held. On 4 August Miss Catalina Alliende, Saif’s college (UCI) principal and the honorary consul of Chile in Islamabad testified in court establishing the fact that it was on her behest that Saif travelled to Santiago, Chile to learn Spanish at eFronteras.

On 5 August, Public defender Gabriel Carrion reveals that the proceedings in which personnel entered entered Saif’s residence while he was at the embassy, in which ‘evidence’ was found against him, were illegal. The entry was without a warrant and without judicial authorisation, thus, from a judicial perspective, the evidence collected is considered unreliable and polluted.

The 120 day investigation period expired on 12 September 2010 but this was effectively ignored by Chilean authorities. Prosecutors sought an extra 90 days investigation period, but on 4 October 2010 it was extended to another 60 days while Saif was given permission to travel freely inside Chile outside of the Santiago area.

In November 2010, after over 6 months of not being able to bring forth a shred of evidence against Saif, Chilean officials had travelled to the US to take Saif’s brother’s testimony to see if it would bear any important information on the case.

It is clear that the US is heavily involved if not wholly responsible for Saif’s ordeal. Yet the US and Chilean government seem unwilling to let Saif go freely lest they are embarrassed and their corrupt activity is exposed.