London – CAGE has seen legal documents from a number of cases dated from 2016 until today, where the academically debunked ERG22+ framework has been used to assess risk of children and parents in PREVENT-related child removal cases.

Practitioners have been giving guidance to the government and the courts based on the ERG22+ methodology in order to assess future risk to children. This is despite the guidance conceding the limitation of the ERG22+, in that it is not based on verifiable science.

Parents have faced questioning by social workers and PREVENT officers employing a highly subjective and unscientific method of assessing “radicalisation” and “extremism”. This has largely been based on the discredited ERG22+.

CAGE produced a report in 2016 critiquing this framework, citing evidence that its very authors say the method cannot predict risk with any certainty. In addition, over 150 academics signed a joint statement raising doubts about its validity.

Our key concern, is that the government accepts in their own words, that the ERG22+ is no more than ‘working hypotheses’. 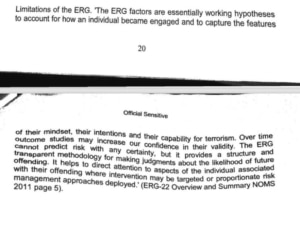 In a 2018 case we reviewed, the ERG22+ report explicitly stated:

“Over time outcome studies may increase our confidence in their validity. The ERG cannot predict risk with any certainty…”

In 2015 CAGE was accused of scaremongering when we said the CTS Bill would lead to families facing the prospect of losing their children to the state based on their beliefs and political views. The evidence we’ve seen demonstrates this is now a reality.

“The simple fact is, the ERG22+ is being employed in the family courts, meaning that PREVENT is seeking to remove children based on subjective and inaccurate perceptions of ideology and not on actual abuse.”

“This is clear evidence that PREVENT is discriminatory and abusive, and is far from safeguarding as its pundits claim – in fact, such claims do far-reaching damage to the principle of safeguarding itself.”

“We cannot allow for a process to continue where families are being judged by a false science – our communities are not lab rats to be experimented on.”