Omar Khadr: who cares for this boy? (republished)

His hair has grown, his voice sounds a little deeper and his wounds appear to have healed somewhat. But what isn’t clear from the first ever Guantánamo interrogation video to be released for public consumption is that Omar Khadr is blind in one eye.

The Bagram airbase lies some 30miles north of the Afghan capital, Kabul. Inside the airbase is a prison, a converted machine-factory built by the Soviets during their occupation of Afghanistan. Inscriptions in Russian are still visible on the walls and doors. During the day, this place is usually deathly quiet. But at night, the sounds of soldiers as they patrol, chains clinking along the concrete floor as prisoners are frog-marched to and from interrogation rooms and screams of interrogators and interrogated usually keep you awake.  It is worse than Guantanamo. In this place I witnessed two separate killings by American soldiers – the subject of this year’s Oscar-winning documentary, Taxi to the Dark Side – before I too was sent to Guantanamo. It is here too that I first met Omar Khadr, a boy from Canada who’d just turned sixteen.

I never really understood why but our military police guards would always refer to Khadr as ‘Buckshot Bob’ or simply ‘Buckshot’. His wounds didn’t seem to me as if they had been caused by the blast of a shotgun. They were much more horrific. Chunks of his chest and shoulder had been blown out – or so I’d assumed and, he was unable to see through one of his eyes because of the injuries he’d sustained, allegedly in a fire-fight with US troops. His chest looked like he’d just had a post mortem operation performed on him – whilst he was still alive. He was emaciated, fragile and quiet. But the rumour spread around about Khadr claimed that he’d launched a grenade-attack on unsuspecting US forces. Consequently, the military police units guarding us all treated Omar Khadr with open contempt and hostility. He was sometimes screamed at all night long; made to stack up crates of water bottles which were thrown down again; a hood placed over his head whilst his wrists were shackled to the ceiling. But, three years after my release from Guantánamo, and five since I last saw Khadr, I have come to realise the logic behind the name ‘Buckshot’.  Photographs released by the US military this year show Khadr when he was first captured. The missing chunks of flesh were exit wounds from shotgun rounds fired. Its is now clear, based on statements by the soldiers who captured him, that Khadr had been shot in the back – at point-blank range. 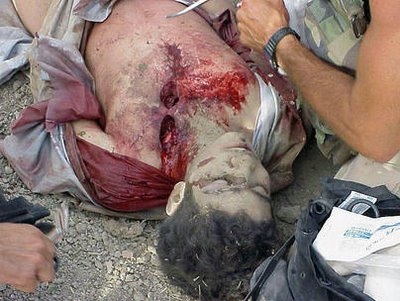 Khadr and I shared a communal cell where walking, talking, standing or simply looking in the wrong direction would earn us a few hours with our hands chained above our heads to the cage door and a hood placed over our faces. Still, I managed some whispered conversations with Khadr who, just like me, had begun to comprehend his ordeal had only just started.

Omar’s treatment varied according to the perception various soldiers and interrogators had of him: most of it bad. But a handful of them, who actually got to know him and speak to him like a human being, told me how bad they felt about having a child like him in custody. I recall the last words Omar Khadr said to me before he was shipped off to Guantanamo, ‘You’re fortunate, people here care about you. No one cares about me.’

Omar was later accused of causing the death of a US Special Forces operative with a grenade. Yet a report given by the soldier who shot him says that not only was Mr.Khadr alive there, an adult man was also alive at the time he, the U.S. soldier, rushed in shooting. This contradicts the testimony of another solider who said that only Mr.Khadr was alive at the time. Whatever the case may be, Omar is fast approaching the seventh year of his detention in Guantanamo. He is now twenty –one.

In January this year, a training document produced by the Canadian foreign ministry, which referred to Guantanamo Bay, listed the United States as a country known to practice torture. Despite this assertion, the only westerner remaining in the world’s most infamous prison atGuantanamo Bay is the Canadian, Omar Khadr. And his government, which accepts the abuses faced by others at such places are very real, will do nothing for its own citizen, who was bought there in chains as a child.

In the video that made headlines this week Khadr is heard repeating some words in a very distressed state. Whilst there is some dispute about whether he’s saying ‘help me, help me’ or ‘kill me kill me’, his family believe he’s simply saying, ’yaummi, yaummi’ – Arabic for ‘my mother, my mother’.  Although this video was recorded (in secret) over five years ago, the words I last heard from this gaunt, softly-spoken child all those years ago echo yet again. But this time the world can see and hear him: ‘No one cares about me.’

This article was first published for CagePrisoners in July 2008. An abrdiged version of it appeared on Jurist