This week our international director Muhammad Rabbani appeared in Westminster Magistrate’s Court to defend the privacy of a torture victim after he was arrested for not divulging passwords at a Schedule 7 stop at Heathrow in November last year. Rabbani was protecting crucial information in a case implicating high ranking officials in torture.

Judge Emma Arbuthnot was constrained by the intrusive law to deliver a guilty verdict for obstructing a Schedule 7 search. Importantly she acknowledged that the issue of passwords and privacy was a fundamental one in our digital age and agreed that Rabbani was indeed carrying confidential material and that through his actions, was of good character and sound belief.

Such an outcome is a positive step in the campaign against this authoritarian law. It underlines the absurdity and injustice of Schedule 7 and demonstrates how far we have regressed when protecting client confidentiality and your privacy is deemed a ‘terrorism’ offence. The law allows for warrantless digital strip-searches, suspicionless stops, and mass profiling. As it stands, CAGE has no option but to appeal the verdict and challenge the law itself.

The media coverage of the outcome was overwhelmingly positive for CAGE. News outlets underscored the role that CAGE was playing, as the guardian not only of torture evidence, but also of the privacy and rights of all. Several journalists wrote about Rabbani’s courage and even more of them acknowledged the implications of the case for all those who pass through airports with confidential client information or private personal or professional data. Many raised the issue of the injustice of the Schedule 7 law.

The case also mobilised the community. The public gallery at court was packed, and over 100 supporters turned up outside the court on a Monday afternoon to show solidarity with Rabbani. Countless messages of support came from far and wide. Twitter and Facebook were alive with comments and we were overwhelmed by the goodwill shown towards CAGE. We would like thank all those who raised their voices in unison with ours.

Here are some of the reactions to the trial and verdict.

Wide appeal and support from the community:

Muhammad Rabbani has emerged 2 a warm reception from supporters outside Westminster Magistrates Court, after being found Guilty at his trial pic.twitter.com/PJDEJf1Vsf

Let that sink in. Protecting your privacy and that of a torture victim is a “terror” offence. @UK_CAGE https://t.co/FCLNyOSTOa

May Allah bless our brother Rabbani and elevate his status in both worlds. Was willing to go to jail for our #RightToPrivacy. #WithCAGE ☝?❤ https://t.co/KwWByaPTrF

And precisely why the tag of being called a ‘terrorist’ is nothing more than political gameplay. #RightToPrivacy https://t.co/1NCJbnJio0

Muhamad Rabbani from @UK_CAGE may have been found guilty. But it was a victory as he challenged an oppressive law that discriminates. pic.twitter.com/fG7adofnEI

#MuhammadRabbani ‘found guilty of wilfully obstructing police by refusing to hand over password’ @UK_CAGE – a mighty perversion of justice. https://t.co/Jlmqz5jxUW

He was prepared to go to prison to protect client confidentiality

Muhammad Rabbani is a hero & was applauded & given gifts as he left court pic.twitter.com/4ZO4ycyo3J

Muhammad Rabbani today just took one for the team. Found guilty of an unjust law, now is the time to repeal it. #RightToPrivacy for all. pic.twitter.com/om6U5sU4Xp

With a modern day civil rights hero. Muhammad Rabbani took on the government and held them to account. @UK_CAGE #PassWithPrivacy pic.twitter.com/JOO1Bc0saP

The smile on Muhammad Rabbani’s face as he leaves court. Smiling at the face of injustice. Truly a brave man. #Schedule7 #PassWithPrivacy pic.twitter.com/Z6lRGViHpT

How are you supposed to teach young people to trust in justice when someone who takes a principled stand is treated like this? #Rabbani

It was undoubtedly targeted @UK_CAGE man randomly checked?! Like em or loathe em they r fighting 4 our rights of privacy & confidentiality https://t.co/zuU2x3sCMF

One of the most popular NGO’s in France sent their well wishes:

Support from activists and journalists:

If #MuhammadRabbani is found guilty, that would mean the official end of #privacy in the #UK even for lawyers, doctors, researchers… https://t.co/PL9uox7HYy

He got tired of having his own government demand his passwords every time he re-entered his own country, so he heroically refused to do it: https://t.co/K6xfW02MBW

In solidarity with Muhammad Rabbani who stands trial today for refusing to hand over passwords @UK_CAGE #Schedule7 https://t.co/f3kQVGt99R… https://t.co/9Yy0St3rL9

Guilty verdict in #Schedule7 trial but @UK_CAGE‘s Muhammad Rabbani is given a conditional discharge. Hardly a victory for security state!

The UK’s airport powers under Schedule 7 are inherently abusive, & UK Govt exploits them in the most oppressive & abusive manner possible: https://t.co/slX4n9SXpq

We all owe thanks to this brave @CAGE official for resisting UK’s oppressive Schedule 7 law, which Govt still abuses https://t.co/408pvkVsby

Conviction of Cage’s advocacy director an abuse of anti-terror legislation https://t.co/NjYloasvMy via @IndexCensorship

Some serious surveillance law geekery going on in court 1. Shame there’s so few surveillance activists here to see it https://t.co/In7T57fgJP 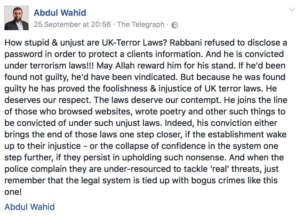 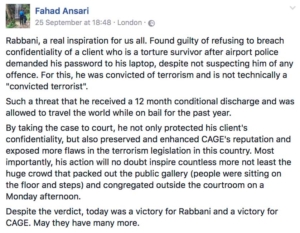 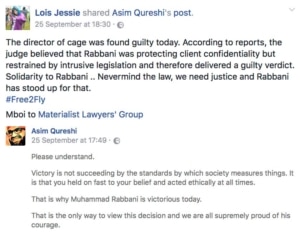 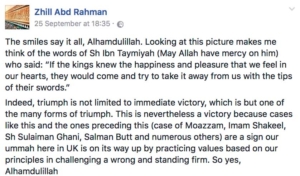