On Marvel, Hollywood and the Dehumanisation of Muslims

Shaf Choudry describes how films such as Marvel’s Iron Man fit within a long-running project of Hollywood projecting and reinforcing dehumanising depictions of Muslim populations, in line with American foreign policy aims.

If you’re on Twitter or any form of social media it’s hard to avoid the hype around Marvel’s WandaVision which has been received as a critical and commercial success.

The MCU movies, across its twenty-three movies and box office revenue over $22 billion, is not only a commercial success but a significant cultural reference point.
But how many of us are aware of the subtle (and not so subtle) otherisation and demonisation of Muslims in the MCU?

Is it possible that Marvel Studios are guilty of framing Muslims as threats to a Western way of life or as terrorists? Is it all a coincidence? Or like Thanos, is it… inevitable?

This and other examples of Muslims being used as a plot device invoking the War on Terror are unpacked below.

Let us start at the beginning by considering the plot of 2008’s Iron Man, which marks the start of Phase One of the Marvel Cinematic Universe.

Iron Man sets the scene and foundation for the subsequent thirteen years of the MCU. It was significant for several reasons, predominantly because Iron Man was the first release from Marvel Studios that had recently consolidated all writing, production, and editorial decisions under Marvel’s own control.

Phase One of the MCU also came with a promise that the movies would be faithful adaptations of the source materials, having Stan Lee’s rich corpus of Marvel Comics to draw from.

If you cast your mind back thirteen years, you will recall that the movie establishes our protagonist Tony Stark and his motivations in donning the technologically advanced suit of armour to become Iron Man.

The origin story goes like this; (spoiler alert) Tony Stark, of Stark Industries is kidnapped and is held in a cave somewhere in Afghanistan by the Ten Rings Group led by the keffiyeh wearing Raza.

“This is not art imitating life, rather a formal symbiosis established between the U.S. Department of Defense and Hollywood in the years following 9/11.”

Stark is then ordered to recreate sophisticated weaponry a la Stark Industries with the help of an Afghan scientist named Yinsen. Given that the movie was released in 2008, the US and allies were already seven years into their campaign in Afghanistan, it came as no surprise to audiences that the antagonists were hiding in Afghan caves.

It just made sense. But did it really?

If we compare the source material, the original Iron Man comic released forty years prior to the movie in 1968, we find some differences that don’t make sense.

Tony Stark is kidnapped and held in a cave, but not in Afghanistan – according to the comic the cave is in Vietnam.

Scary looking Raza wearing his keffiyeh speaking in Arabic? Nope, according to the comic his name is Wong Chu.

What about the Afghan scientist who sacrifices himself to secure Iron Man’s release, Yinsen? Almost, in the comic his name is Ho Yinsen.

Not so fast Marvel, the image below refs Ho Yinsen, as in the 1968 original comic. Originally from ‘Timbetpal’ (fictional ‘oriental’ land) – but in the movie he was adapted into Afghani ‘Yinsen’. Along with warlord Wong Chu who became interchangeably Urdu & Arabic speaking Raza https://t.co/eu5jRgjv4X

It doesn’t take a historian to deduce that 1968 was the height of the costly and seemingly unending war in Vietnam. Public opinion was vehemently against the war given the cost, both in fatalities and dollars.

That Stan Lee wrote Iron Man as a piece of nationalistic propaganda to warn us of the ‘communist threat’ and to galvanise public support doesn’t seem so far-fetched. That Marvel Studios subsequently replaced the ‘western threat’ from Vietnamese to Afghan in line with the geopolitics du jour is shocking, if not unexpected.

Given the parallels between the war in Vietnam and the war in Afghanistan, the similarities one might say, are stark.

As Tony Stark proclaims in the movie “I prefer the weapon you only have to fire once”, and so it seems that in this case two birds, forty years apart, can indeed be killed with one stone.

Examples of how Muslims have been used as props or backdrops to further geopolitical narratives are easy to find.

Conducting research for a forthcoming report from the Riz Test, we have analysed over 1,100 movies and TV shows from the last 120 years, with our headline finding being that 87% of the movies that qualify fail the Riz Test.

One pattern that exists in our data is the use of Muslims as disposable narrative props to guilt-wash Western sensitivities.

We see this in Three Kings (1999) which sought to humanise the lives of the Iraqi people through the lens of three American soldiers on a quest to recover stolen Kuwaiti gold.

This narrative subversion was lauded by Bill Clinton in a 2000 interview “I loved that aspect of Three Kings. The biggest problem in human society is fear and distrust and dehumanization and violence against the Other. And that is a big problem. So, what we have to learn to do… is to actively celebrate our differences.”

These honourable intentions are somewhat undermined by the fact that Dr Jack Shaheen, when asked to review the original script by Warner Brothers, noted that 100 of the 136 pages depicted Iraqis killing Iraqis, or GIs killing Iraqis.

It’s #Oscars90 Sunday and did you know the #DoD works with #Hollywood to ensure the #military is correctly portrayed in films? Find out how these partnerships work: https://t.co/LX3Q52SwQ6.

Either way, Hollywood deemed Iraqi blood as a necessary pre-requisite to alleviate American collective guilt regarding the role of their Army in invading Iraq and its subsequent devastation.

“Hollywood deemed Iraqi blood as a necessary pre-requisite to alleviate American collective guilt regarding the role of their Army in invading Iraq and its subsequent devastation.”

Another more nefarious example of this is 2014’s American Sniper where we are asked to sympathise with Chris Kyle, the most lethal sniper in US military history.

Or The Siege from 1998 where Hollywood fantasises about Arab internment camps, where the only good Muslim is one who is survived by his proximity to the FBI, whiskey in hand.

As Nikki Tabibian outlines in her 2017 paper On the Hollywood Industrial Complex, this is not art imitating life, rather a formal symbiosis established between the U.S. Department of Defense and Hollywood in the years following 9/11.

For the purists amongst us, it was not sin enough that Marvel stray from the source material for the Iron Man movie, but the temptation was also too great for Marvel not to lean into the geopolitics of the day. The movie is imbued with tropes that align the audience against the Afghans and sympathise with the emergent superhero – as if so say that the collateral damage was worth it in the end.

We see this again ten years later in Black Panther (2018) where a Boko Haram-esque group hold a gun to a hostage shouting “Wallahi I will kill her”. It appears that even in the world of make0believe and fantasy where anything is possible, the War on Terror remains an ever-present and unshakable backdrop when it comes to Muslims.

On the surface it may feel unfair to critically re-watch movies without the anchor of their context, but given that these are trends that transcend decades, it is necessary to critically engage with an industry that is heavily invested in framing Muslims in such narrow terms. 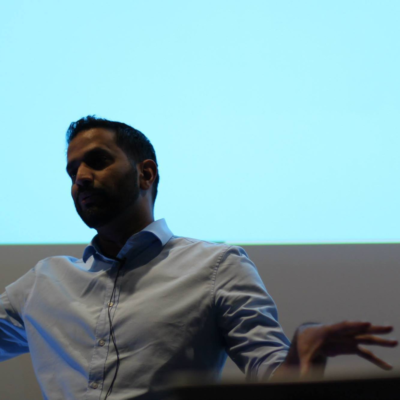 He is cofounder of The Riz Test and the Seen on Screen Institute which researches the way that Muslims are portrayed on Film, TV and Videogames