I want to begin by thanking you for taking your time in responding to me in such detail. I appreciate you being open to a dialogue on our respective positions.

As you rightly point to, empiricism must be the standard by which we make all decisions. The back and forth between various sides of this debate seems to be largely anecdotal, and so I would rather turn our discussion to what we actually ‘know’.

I mentioned this in my other letter, but I request you read our report on the ERG22+. I think you will better understand our position on the way the ‘science’ of pre-crime has been constructed, and why people should be asking questions.

Already we had 19 experts from across traditions review the report as well as 150 academics sign a joint statement specifically asking these questions and calling for the publication of the ERG22+ evidence base.  Up until now, the Home Office has refused to release that information. In the interest of transparency and public debate, I welcome you to call upon the Home Secretary to make this data public.

One of the key points you emphasise is the idea that the ‘science’ is not used to engage in prediction exercises. The Counter-Terrorism and Security Act 2015 requires a degree of prediction by forcing front line staff to be trained to look out for signs in a pre-criminal space. I’m afraid that your certainty, while I accept is wholly honest, is misplaced. I assume that someone must have been helping you to understand the role of the ERG22+ study as it is classified, and so perhaps I can elucidate further.

Like you, PREVENT officials claim that the ERG22+ is only used to inform the Channel interventions, and not involved at all in frontline PREVENT training. Here are two such examples: 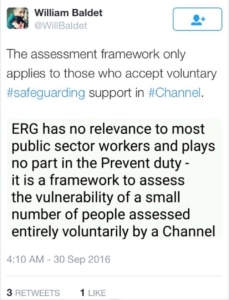 Perhaps they have not been informed better themselves, or perhaps due to the layers of secrecy, no one actually knows what the reality is – but there does seem to be a lack of critical thinking among PREVENT officials. The Channel Vulnerability Assessment Framework Appendix 4 specifically says that it is based on the ERG22+ on its title page. Here is their own admission at the bottom left corner of the page: 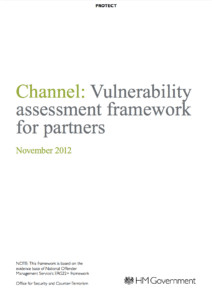 So in keeping with your own point, it is important to go through the PREVENT training that is delivered to front line staff around the country. Here is the Government’s own Home Office produced PREVENT E-Learning – it speaks specifically of the who it trains and why – to spot the signs of radicalisation: 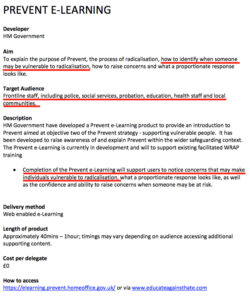 When one goes through this e-learning programme that has been delivered to tens of thousands of frontline staff, the presentation makes clear itself what the radicalisation factors are based on…the Channel Vulnerability Assessment Framework…which we know from their own documentation is based on the ERG22+: 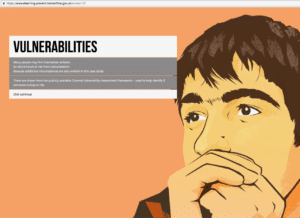 My purpose here is not to score points on you or anyone else for that matter, but I take pseudo-scientific approaches to our communities very seriously, particularly when they are shrouded in secrecy. I hope you will accept that there is no other way to view this. Frontline staff are being trained currently in this ‘science’ and it is not simply a “work in progress” – that is not an acceptable standard when thousands of people are being referred and put through these programmes on a statutory platform through the Counter-Terrorism and Security Act 2015.

I am not going to respond to some of the other points you made that I thought perhaps could provide some further clarity to our terms of reference for this discussion, but I am happy to know that you are open to talking at least.

CAGE maintains its role as a watchdog for the excesses of government overreach as it seeks to combat violence. We do not wish our own communities to engage in violence either, but neither are we willing to accept a situation where a two tier justice system develops in the treatment of our communities, due to the murderous actions of a few.

Finally, again, I thank you for taking your time to engage. I look forward to hearing from you further and perhaps the opportunity to dissect these matters in a way that is not just fruitful to our communities, but the long term safety and security of all.