The impact on the Muslim community 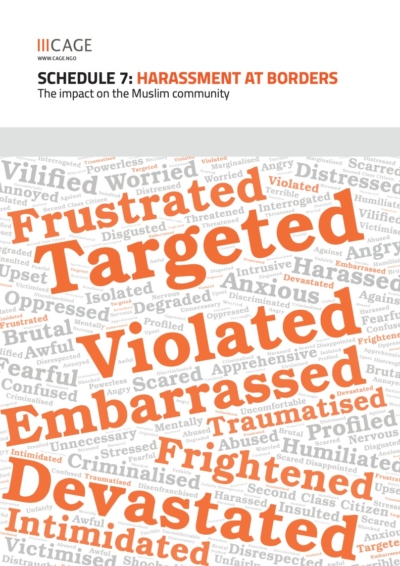 CAGE has been dealing with Schedule 7 related cases since our inception, making this report, in many ways, overdue. This report represents an in-depth analysis of a law which, has affected hundreds of thousands of people over the past 18 years.

Weaving together powerful first-hand evidence gathered from Schedule 7 stops, with empirical and legal analysis, this report not only critically examines Schedule 7, but also situates it within the wider context of counter-terrorism laws and policies, providing the first ever comprehensive analysis in the UK.

Through this evidence-based research, the report concludes that Schedule 7 disregards the norms of due process at every level, and it permits and justifies systematic abuses against individuals including ordinary Muslims, journalists, aid workers, and lawyers.
As such, the law is not only ineffective, but it is deeply counter-productive.

This report recommends that the government repeal Schedule 7 TACT and Schedule 3 of the Counter-Terrorism Border Security Act with immediate effect, and failing this, that civil society act to document the use of new Schedule 3 powers to target individuals and groups on a more overtly political basis and, within the emergent framing of political movements as ‘hostile activity’, continue to call attention to the danger this law poses to community relations and society as a whole.

They said to me they are concerned about radicalisation. I said, “What is radicalisation: taking a tin of beans, to feed someone?”

The mother who was stopped on her way home from Makkah

I kept saying please, I am worried about my son. She said: “He’s old enough to tell your husband if he is worried.” I kept thinking: “You don’t have kids. You have no idea.”

The Muslim revert who wanted to stay with his children

It was like a progression, to establish my religiosity. And the whole thing is done in such a way as to make you feel that you are doing something wrong for simply practising Islam.

The process is to intimidate you to get information out of you that will be useful to them, but I am not afraid at all. What they are trying to achieve doesn’t work with me.

The aid worker who got stopped, then approached by MI5

When they gave my data back, every single Islamic nasheed and book I’d had on my phone was removed. Literally, all of it. Everything Islamic – gone.

The father who quoted Quran to MI5

“I told them about what Allah says in the Quran, that we are not allowed to spy on one another. They said they had a different interpretation of that verse. I said: “Well, you keep to your interpretation and I will keep to mine.”

The Muslim revert who was asked to strip

They said they want me to take everything off, and squat down in front them. I told them no way, I would never.

Join us at our report launch events

Register for our launch events in a town near you 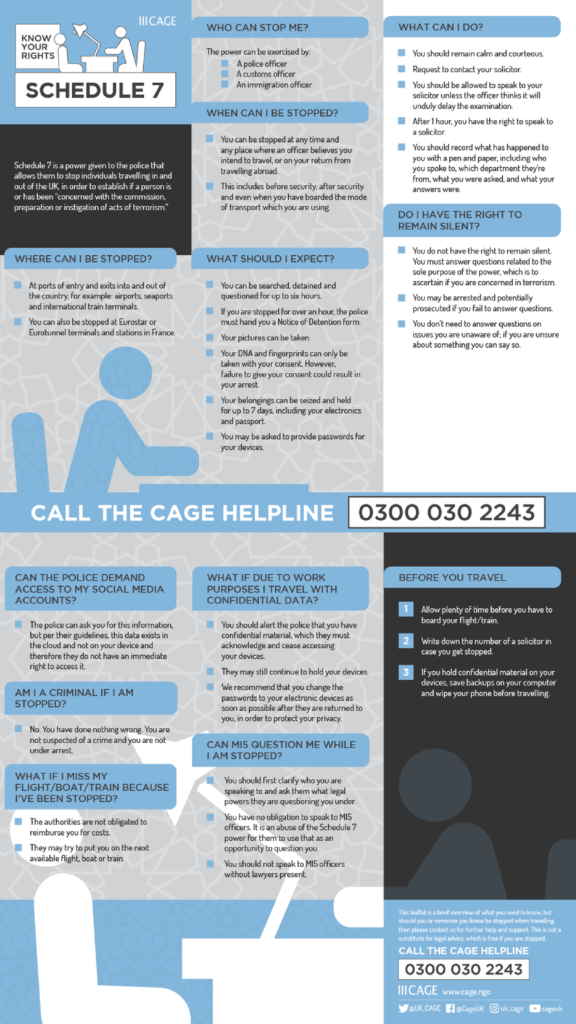 Right-click image to save

Where can I be stopped?

Where can I be stopped?

Who can stop me?

The power can be exercised by:

When can I be stopped?

What should I expect?

What can I do?

Do I have the right to remain silent?

Can the police demand access to my social media accounts?

Am I a criminal if I am stopped?

No. You have done nothing wrong. You are not suspected of a crime and you are not under arrest.

What if I miss my flight/boat/train because I’ve been stopped?

What if due to work purposes I travel with confidential data?

Can MI5 question me while I am stopped?